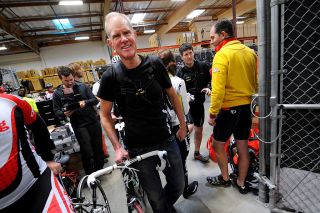 As protests against systemic racism and police brutality continue across the USA in response to the death of George Floyd, Specialized founder Mike Sinyard has released a statement outlining the company's plans to encourage inclusion and diversity in cycling, personally committing $10 million of additional funding.

The message, which was sent to partners and retailers on Thursday, reflects that cycling has a problem with racial inequality, adding that the company has played a part in that. Sinyard added that moments of crisis can lead to real change.

"This is not a normal year," Sinyard wrote. "Since mid-March, you and your families have had your routines, social lives, and activities completely disrupted, with no certainty of what normal will look like into the future.

"While we push hard towards the future, I want to acknowledge that this moment is especially hard. In this time, the bicycle, and the work that each of you do to change lives through cycling is more critical than ever.

"As I reflect on the current protest movement, I recognize that cycling, which can have such a positive impact on people’s lives, also has a problem with race, and Specialized has contributed to that problem. But I truly believe that in moments of crisis, we have the greatest opportunity for making a change, and a difference."

Since 2015, Specialized have been running their own public non-profit program named Outride – formerly the Specialized Foundation – which is dedicated to improving the lives of young people through cycling.

Sinyard stated that more must be done, however, adding that he is personally committing $10 million to the foundation over the next three years.

"We have been doing this work in our own way through Outride, breaking down barriers so that all kids have safe access to bicycles and places to ride, and in doing so, changing the face of cycling forever. But it’s is not enough - we need to go further, and faster," Sinyard wrote.

"We so believe in the transformative power of the bike to empower the next generation of riders that together with Outride, I am committing $10 million over the next 3 years to accelerate the great work that the organization is doing to bring school and youth development programs and safe places to ride, with an increased focus on underrepresented and underserved communities."

Additional funding will also be used to help the Legion of Los Angeles Elite Cycling Team, the team founded by US criterium champion Justin Williams to increase representation in pro cycling. Specialized already sponsors the squad, and will provide more funds to be used as the team sees fit.

The team recently launched a Gofundme fundraiser to help support its initiative of increasing diversity and inclusion in the sport through new events, junior programs and rider grants.

"We have delivered additional funding separate from our sponsorship to the Legion of Los Angeles Elite Cycling Team based in the USA to further their work of increasing diversity and encouraging inclusion in cycling – we believe in this work and mission and are giving the team complete discretion on how to direct these funds to continue their work.

"Now is a time for all of us to talk less and listen more.  Discrimination and prejudice of any kind have no place on our team or within our community of riders.

"As our sport and community grows, the faces, ideas, and perspectives of the people you’ll be riding with will look different than what we are used to today. Let’s listen to each other, learn from each other, share the trail and the road with each other, fight for each other.

"We believe that cycling changes lives, and that together we can pedal the planet forward."

The moves taken by Specialized and Sinyard are the latest response from a bike manufacturer to the ongoing protests.

Last week, Fuji's North American distributor BikeCo. announced that the company will be halting bike sales to police forces in the USA as a result of police action during the protests.

Trek, which also supplies police departments with bicycles, is expected to issue a statement on the use of bicycles by police, though it's not expected that the company will follow Fuji's move.

These funds are set up to help protesters, the families of victims, and black businesses and charities around the United States and internationally. If you're able, consider setting up a recurring donation to one of the organizations below, to help provide sustained support beyond this moment.

Campaign Zero - Launched by Black Lives Matter activists, Campaign Zero is a national organization that works with law-makers at every level to end police brutality and systemic racism through thoroughly researched policy solutions.

Reclaim the Block - Founded in 2015, this group organizes the local Minneapolis community and city council to redirect funding away from the police department and into other initiatives that promote health and safety.

The Marshall Project - Nonprofit journalism "that seeks to create and sustain a sense of national urgency about the U.S. criminal justice system."

NAACP Legal Defense and Education Fund - This is one of America's biggest legal organizations fighting for racial justice. Much of their efforts are focused on litigation, education, and advocacy.

Bail funds - An organized list of places to donate if you wish to contribute to bail funds going to arrested protesters in Minneapolis, Atlanta, New York, and many other cities. ActBlue will allow you to easily split a donation to many funds, but keep in mind the organization takes its own transaction fee.

Coming to terms with the events of this past week isn't easy. The violence and anger is, at times, almost incomprehensible. As we all struggle to cope and understand how we can make a difference, we've found some videos, books, and articles to be helpful. We've sought to include a mix of educational materials that provide context and expand understanding.

For our white friends desiring to be allies - Courtney Ariel's article is a great outline for white people who want to help lift up others without inadvertently making the conversation about them.

Anti-Racism Resources for White People - An exhaustive list of anti-racism media including movies to watch, essays to read, and people to follow to further educate yourself.

The Case for Reparations - A deeply reported article by Ta-Nehisi Coates that uses personal stories to explain the damage caused by centuries of racist government policy.

What does the demand to "defund police" mean? What about "prison abolition?"

You probably won't hear mainstream politicians discussing these ideas, but you may see them on protest signs. If these demands are new to you, abolitionist @jaybeware briefly explains them in a Twitter thread which provides links to books and essays that expand on the topics. Also see the book 'Are Prisons Obsolete?' by Angela Davis.

If you plan to join a physical protest, here are some useful links to make sure you have everything you need to stay safe.

What to bring to a peaceful protest - Vice's guide on what to take with you to a protest.

Protect your protest - An in-depth plan for keeping yourself and others safe during a protest.

How to Cop-Proof Your Phone Before Heading to a Protest - Gizmodo's how-to on protecting your phone data.

ACLU Know your rights - Everything you need to know about your rights as a protestor and what to do if you're detained by the police.