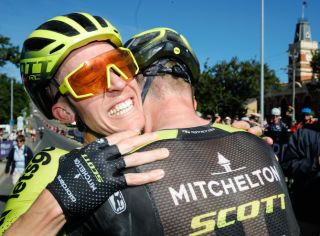 Cameron Meyer’s Mitchelton-Scott teammates were as delighted as he was at winning the elite men’s road race at the 2020 Australian Road Championships (Image credit: Con Chronis / Zac Williams)

It was a grand day out for Mitchelton-Scott on the fifth and final day of the 2020 Australian Road Championships in Buninyong, Victoria, on Sunday, with first Amanda Spratt winning the elite women's road race title before Cameron Meyer achieved the same feat in the elite men's event.

While it was Spratt's third road race victory, Meyer has been hunting the Australian title for the past 12 years, coming close on numerous occasions, but never quite striking gold.

"It's been 12 long years," a tearful, but delighted, Meyer told reporters on the finish line. "I fell in love with this event so long ago, and have been close so many times.

Meyer in tears after missing out in 2019 Australian championships

"Someone asked me the other day, 'You've got nine world championships; why do you want this one so much?'" he said of his world titles taken on the track in the Madison, points race and team pursuit over the years, while the 32-year-old has also twice been the national time trial champion – in 2010 and 2011 – and the national criterium champion in 2013, as well as winning time-trial gold at the 2018 Commonwealth Games.

"My brother won it [Travis Meyer in 2010], and Luke Durbridge – one of my best mates – has won it [in 2013], and I just wanted it so badly," Meyer said of the national road race title, "and now I can proudly wear the green-and-gold jersey in Europe.

"As soon as summer comes, I come back to Australian soil and can't wait for the first week of January," he continued. "I love it so much, and don’t know how long it will take for this to sink in, but it's right up there."

An Olympic medal remains one of the few prizes that Meyer has yet to achieve, and is something he'd like to set right this summer in Tokyo.

"Yeah – it's a big year, and the Games are another big goal," he said.

White: The guys rode selflessly and together

"We needed key guys in the move today," added head sports director Matt White. "The best chance for us to win was to have a numerical advantage and the boys played that out right to the end.

"Because we had Nick [Schultz] up the road, we were in the driving seat and, unlike in recent years, the selection happened later in the race, likely because of the milder weather," he said in a team press release. "Once that selection happened, we had the numbers, and the guys rode selflessly and together; the goal was to take the jersey back on someone’s shoulders, and we achieved that.

"I've been working with Cam for 12 years, so it's great to see persistence paying off for him, and as a team it does mean a lot to take the jersey back to Europe with us," said White.