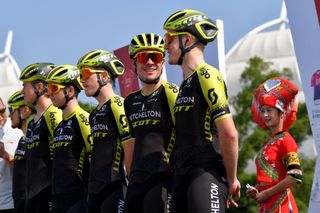 Mitchelton-Scott at the 2019 Tour of Guangxi (Image credit: Getty Images)

Mitchelton-Scott are Australia's by-now well-established WorldTour squad, boasting a more-than-respectable palmarès that includes big one-day wins at Paris-Roubaix, Liège-Bastogne-Liège, Il Lombardia and Milan-San Remo, and the overall victory at the 2018 Vuelta a España since the team's debut as Orica-GreenEdge in 2012.

Mitchelton-Scott enjoyed another hugely successful 2019 season, which included overall stage-race wins at the Tour Down Under, the Settimana Internazionale Coppi e Bartoli, the Czech Cycling Tour and the CRO Race, multiple stage wins at the Ruta del Sol, the Czech Cycling Tour and the Tour of Britain, and the team's best-ever Tour de France, where they took four stage victories courtesy of Daryl Impey, Matteo Trentin and Simon Yates, with the latter taking two.

The Yates brothers, Simon and Adam, were once again the squad's stand-out riders in 2019, with the weight of the team's strength and experience thrown behind the British pair in both Grand Tours and shorter, hilly stage races.

Although the team was unable to repeat its first overall Grand Tour victory, when Simon Yates won the 2018 Vuelta a España, eighth place for Simon at the Giro d'Italia and his two wins at the Tour, as well as 10th place overall for Mikel Nieve at the Vuelta, were results that the team would have been thrilled with just a few, short years ago.

Simon Yates: The 2018 Vuelta champion was disappointed with his eighth place overall at last year's Giro, having been in the mix for the oveall win in Italy the previous year, but his stage wins at the Ruta del Sol, Paris-Nice and that brace of victories at the Tour ensured that he nevertheless had a very successful season.

Adam Yates: It was a disappointing Tour de France for Adam in 2019, when he had the full support of the team, including twin brother Simon, but was unable to translate the confidence of having taken stage wins at the Volta a la Comunitat Valenciana, the Volta a Catalunya and the Itzulia Basque Country in his build-up to the race into what was needed at the Tour. He'll hope for better in 2020.

Mikel Nieve: The veteran Spanish climber may hover more in the Yates brothers' shadows these days, but he remains a key member of the team and a lieutenant de luxe for the British pair at the Grand Tours, showing his enduring strength with 10th place overall at the 2019 Vuelta.

Esteban Chaves: The Colombian climber came back with a bang with a stage win at the Giro in May, following a year out recovering from glandular fever. Both he and the team would naturally love to see him return to his 2016 best, which saw him finish second overall at the Giro, third overall at the Vuelta, and win Il Lombardia.

Mitchelton-Scott have become an increasingly dangerous and capable Grand Tour threat since the arrival of Adam and Simon Yates back in 2014, and the three-week races have become the team's raison d'être in recent years, to the point where they even eschewed burgeoning sprint talent Caleb Ewan ahead of the 2019 season, and have now let all-round talent Matteo Trentin seek pastures new at CCC Team for 2020.

However, in that Simon Yates has shown he's capable of winning a Grand Tour by taking the 2018 Vuelta, and 2016 Giro runner-up Esteban Chaves has shown good signs of returning to his best after glandular fever, it's no surprise that Mitchelton are concentrating their efforts on trying to now win the Giro and/or Tour.

While the likes of seasoned veteran Daryl Impey and youngsters Jack Haig and Lucas Hamilton are capable of performing season-long for the team, losing the likes of Caleb Ewan a year ago and now Matteo Trentin, in particular, could turn the team into even more of a 'one-trick' Grand Tour pony.

That might be what the team's aiming for, thanks to the abilities of the Yateses, Chaves and Nieve, but Trentin's presence – after two very fruitful years in which the Italian has scored big, with his European Championships road-race title in 2018 and stage wins at the Tour, the Ruta del Sol and the Tour of Britain, not to mention silver at the World Championships road race at the end of last year and numerous top-10 placings at the spring Classics – will surely be missed.

It'll likely be a case of more of the same in 2020 for Mitchelton-Scott: the further development of their capable young riders, opportunistic stage wins in shorter stage races, the targeting of the general classification at the Grand Tours, and hoped-for successes at one-day races with their Classics squad, although they're likely to sorely miss Trentin.