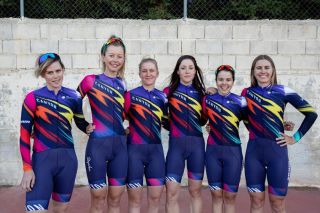 Tanja Erath (Canyon-SRAM) put her vast Zwifting experience to good use netting the stage 3 victory at the Virtual Tour de France on Saturday. The former Zwift Academy winner said it’s all about improving watts, reading the races and learning how to use the in-game PowerUps.

"We have raced a lot of Zwift in the last few months and I could really see my wattage increasing and improving," Erath said after winning the third stage held on Zwift’s newly released R.V.G course on the upper half of its France map. "I can say from my own experience that experience plays a big role, too. It took me 30 to 35 races to finally figure out how to race these races, how to read the courses and play with the special functions like PowerUps. It takes experience to get on top of the game."

The Zwift Academy programme started in partnership with Canyon-SRAM in 2016 and since then four athletes have won the contest and have secured contracts to race on the professional women’s circuit with Canyon-SRAM. Erath won the 2017 edition of the Zwift Academy and has continued to race with the women's WorldTeam every year since.

In the post-race press conference, Erath said that she hasn’t race virtually as often as she used to, and had only participated in the Zwift Pro-Am Race Series last year. However, with the racing season halted due to the COVID-19 coronavirus pandemic, she has spent the last few months reacquainting herself with the Zwift platform.

"Everybody thinks that if you’ve won the Zwift Academy then you’re experienced on Zwift but I’ve only raced two Zwift races; the Pro Am Series with the team last year, and especially now during the coronavirus, which has increased my experience a lot and has also made me fall in love with the whole Zwift racing and community. It has been great to have Zwift as a possibility to race and stay motivated during this time."

The R.G.V. 24km circuit, of which the women raced two laps, started with 12km of flats and included an intermediate Pave Sprint, intermediate Aqueduc ascent, and another intermediate Ballon Sprint before the finish in Marina for a total of 48km of racing.

"I started speeding up around 290m to go, and I was all out and used my power up from 200m to go," Erath said in a team press release. "I am so, so happy. I raced a lot the last month on Zwift and it really helped me to stay focused, motivated and not only maintain fitness but increase my fitness a lot.

Erath confirmed that she won’t be racing stage 4 at Casse-Pattes or stage 5 at Chalet Reynard, but will return to race the finale stage 6 on the virtual Champs-Élysées on July 19.

"Absolutely, I will race the last stage on the Champs-Élysées. It’s a big race both in real life and virtually, I’m looking forward to that stage and I’ll do my best to go for a second stage win," Erath said. "I’m looking forward to that as it’s kind of special for a woman rider to be able to race the Tour de France even though it’s only virtual. It’s great for women’s cycling and a big opportunity for us."