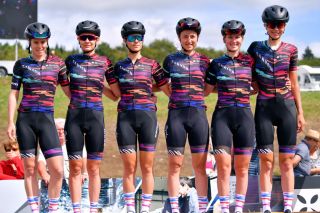 Women's WorldTour team Canyon-SRAM have hailed the inaugural Virtual Tour de France as a big boost for women's cycling. The race, announced on Monday, will run throughout July and consists of six stages which last around an hour each.

Both men's (23) and women's (17) professional teams will take part, with squads fielding four riders for each stage of the race, which will run on the Zwift platform. Zwift Academy winners Ella Harris and Tanja Erath are expected to form an important part of the Canyon-SRAM team for the race.

"The Virtual Tour de France is really exciting as it allows for females to compete under the prestigious 'Tour de France' banner for the first time with all aspects of the event being equal, a huge boost for female cycling when it comes to gathering exposure and momentum for further change in outdoor events also," said Harris in a team press release.

"I believe it certainly marks a revolutionary next step in the future of sport, allowing for age-old gender barriers to be chipped away and albeit in a virtual form. I think it's very cool that Zwift are helping to take the lead by utilising their platform to provide this opportunity."

Virtual cycling has seen a boom in popularity since the spread of COVID-19 pandemic shut down sporting events, including the cycling season, around the world. A number of online races have attracted some of cycling's top names, including virtual versions of the Tour of Flanders, Milan-San Remo, Tour de Suisse and Tour of the Gila.

Zwift has hosted a number of events, too, including the Tour de Zwift stage race and Team Ineos' intra-squad e-races. Harris said that holding the Virtual Tour de France on Zwift would only encourage participation in the sport.

"The one race in professional cycling that even non-cyclists across the globe recognise is the Tour de France, so having the event displayed on such an accessible stage like Zwift can only be beneficial for encouraging participation in the sport and gathering further support, especially in times when many outsiders will be particularly taken with the digital aspect of Zwift."

Tiffany Cromwell said that the race, which is being aired on 10 television networks in 130 countries, is a welcome addition to the virtual calendar at a time when live sport has been severely limited due to COVID-19.

"I think it's another great opportunity for a fantastic platform for women's cycling to perform," she said.

"At a time whilst there's limited live sport on TV at the moment, people are excited to have something to watch either in real life or its virtual counterpart. Being able to have a women's virtual race under the Tour de France banner is exciting and will make it even more recognisable to the general public.

"Any opportunity to have a global platform is really important for the team and our partners so it's a fantastic opportunity to showcase them. The team will go in with the goal of aggressive racing, performing strongly and hopefully taking some victories."

The team will aim for overall victory at the race, which will include stages in virtual Nice, Mont Ventoux and the Champs-Élysées.

"If we want to improve our performance, which should always be the goal, we will have to aim for yellow jersey," said Erath.

"Any opportunity to have a global platform is really important for the team and our partners so it's a fantastic opportunity to showcase them," added Cromwell. "The team will go in with the goal of aggressive racing, performing strongly and hopefully taking some victories."