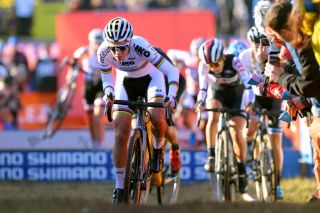 Two of the major cyclocross series have announced that all races during the 2019-20 season will see equal prizes for both men's and women's races. Organisers of the DVV Trofee series and the Telenet Superprestige series made the announcements separately this week.

The moves follow a growing trend for equality around cycling, with several road races offering equal prize money in recent years. Races to make the move include the UCI Road World Championships (since 2012), Tour of California, Tour Down Under, Tour of Britain/Women's Tour, Tour de Yorkshire and the RideLondon Classic/Classique.

On Wednesday, DVV Trofee organisers announced the move on the series website, saying: "Starting this season, women will be able to earn as much prize money in the DVV Verzekeringen Trofee as their male colleagues. The DVV Trofee thus meets the wishes of the UCI and goes one step further."

Philippa York: Women's cycling and the road towards equality

Cycling's governing body had asked organisers to ensure equal prize money for podium finishers, but this season the DVV Trofee will do so all the way down to 15th place. The top three riders at the end of the season will get €25,000, €15,000 and €10,000 respectively, while the 15th place finishers will take home €500.

On Friday, Superprestige series organisers announced they would follow suit, awarding equal prize money down to eighth place. Competition winners will get €30,000, while eighth-place finishers win €1,000.

Meanwhile, the UCI are working towards equal prize money in the Telenet UCI World Cup series. For the 2019-20 season, the top four finishers will earn equal prize money, but the women's prize pot will be €20,100 compared to €39,500 for the men.

The cash on offer will increase next season, and by 2021-22 cyclo-cross season, World Cup races will feature equal prize money, as well a junior women's category. The UCI Cyclo-cross World Championships already features equal prize money for the podium finishers.

The Telenet Superprestige kicks off this Sunday in Gieten, while the DVV Trofee will get underway with Koppenbergcross on November 1. The UCI World Cup has already started with races in the USA last month, and will return in Bern, Switzerland on October 20.

Follow Cyclingnews.com for comprehensive coverage of the 2019-20 cyclo-cross season.