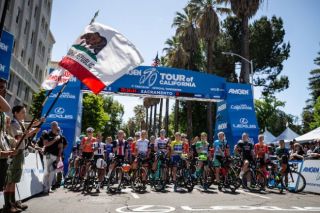 “I am humbled and honored to see this bill signed into law, advancing the historic efforts of so many athletes and advocates standing up for equality,” Boerner Horvath said in a press statement. “The overwhelming bipartisan support of this bill demonstrates that the State Legislature and Governor Newsom have the backs of women and girls throughout California.”

AB 467 requires equal prize compensation for all athletes, regardless of gender, as a condition for approving a lease or permit request for any sporting event on state lands. That means that event organisers will have to affirm equal pay prizes for both men and women at each participant level before the competition can move forward, according to the press statement.

AB 467 would affect all cycling events in California such as the Amgen Tour of California and Redlands Bicycle Classic.

“The passing of AB 467 is not just a monumental moment in sports, but a societal shift toward equity and progress," said Kathryn Bertine, former professional cyclist and CEO of the Homestretch Foundation.

"We have moved the dial forward, proving that inclusion matters. I look forward to seeing the impact of this bill, not just in California, but nationwide. This is just the beginning of equal play for equal pay.”

This spring, Bertine teamed up with the Committee for Equity in Women’s Surfing (CEWS) co-founder Sabrina Brennan to attempt to amend/close the loopholes in California Assembly Bill 467, which focussed on two main areas: paying women and men equally in competitions on California state land, and providing equal racing days for each event.

While the bill has been amended and passed to include equal pay, it still allows the exclusion of women from competitions on state roadways and state land and is silent on equal racing days.

In May, Brennan, who is also the founder of Sport Equity, sent a letter to the director of Caltrans asking the state agency to update its permit requirements to reflect equal access to roadways.

In addition, Bertine wrote in support the amendments that require multi-day cycling events to include the same number of race days for women and men. Bertine submitted an "Oppose Unless Amended" letter requesting an amendment to the bill that was officially uploaded to California legislation.

Although the amendment for equal use of roadway was not included in the passing of this bill this time around, Bertine is hopeful that the new amendments that force equal pay in competitive sports will be enough to lobby for additional changes in the future.

She noted the Amgen Tour of California, which offers equal prize funds to its men’s and women’s fields, offers seven days of racing for the men and only three for the women.

"This is where the good fight comes in…," Bertine told Cyclingnews. "If a men’s event is seven days and a women’s is only three, then the women are not being paid equally because they are not allowed to work equally. So, that’s how we can use this bill to lobby for change – equal pay for equal play – the 'play' isn’t equal, so the pay isn’t equal. The permitting can have a huge effect here."

WE DID IT!!!! 💪👊 #AB467 Equal Pay for Equal Play passed by CA Gov @GavinNewsom! A societal shift toward equity & progress. We have moved the dial forward, proving women’s inclusion matters. The impact of this bill will reach far beyond CA. Read more: https://t.co/ytkgKnXhkq https://t.co/aVp3kKwZgh pic.twitter.com/zGhCHgODpBSeptember 10, 2019