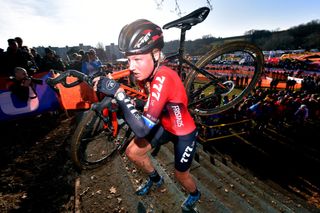 777’s Annemarie Worst tackles the stairs en route to victory at the Tábor round of the 2019/20 UCI Cyclo-Cross World Cup in the Czech Republic (Image credit: Getty Images Sport)

Dutch cyclo-cross star Annemarie Worst (777) has undergone successful shoulder surgery following a crash during a mountain bike race in Leukerbad, Switzerland, on Sunday, and now hopes to be ready for the start of the cyclo-cross season in September, according to reports in the Dutch media.

The overall 2019/20 UCI Cyclo-Cross World Cup winner had to be rescued by helicopter after tearing tendons around her collarbone, although no bones were broken or fractured.

"They called in a helicopter, but it couldn't land where I fell," Worst explained to the Algemeen Dagblad on Tuesday. "So then they had to haul me up on a winch, which was all very exciting, and very high, too. Only when I was in the helicopter did I see just how beautiful the surroundings were.

"It was quite scary," she admitted. "At first, I actually wanted to walk down the mountain, as I felt as though I could. The pain wasn't so bad at the time, although there was a big bump on my collarbone. I assumed it was broken, and that maybe my shoulder was, too."

Her Belgian 777 team then elected for Worst to be operated on by a specialist in Herentals, Belgium, which meant a seven-and-a-half-hour drive.

"That took a while," she admitted to AD.nl. "After a while, you no longer know how to sit."

Worst began her cycling career as a mountain biker, but won the under-23 title at the 2017 cyclo-cross World Championships, and has become best known for her 'cross results in recent years. In 2018, she became the elite European champion on home turf in Rosmalen, and during the 2019/20 cyclo-cross season, Worst won three rounds of the UCI World Cup – in Bern, Tábor and Nommay – en route to the overall title. She then finished second to Dutch compatriot Ceylin del Carmen Alvarado at the World Championships in February.

Until the mountain bike race at the weekend, Worst hadn't raced since February, due to the coronavirus pandemic, but had been looking forward to racing on the road this summer.

"This is my first real injury of my career," Worst said, "and it will take a while to recover from. I had planned to race on the road this year, but that's not going to happen now, and so I now hope to be ready to go again for the start of the 'cross season in September."

Unfortunately I had my first big injury in my cycling carreer! I crashed during the mountainbike race in Leukerbad yesterday. 🚴‍♀️🇨🇭Just woke up from the surgery , now it’s time to recover! 🤕 A N N E M A R I E W O R S T