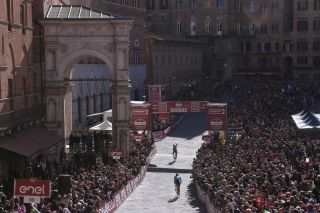 Belgian Cycling Federation president Tom Van Damme has talked about the possibility of the first race of the new WorldTour calendar, Strade Bianche, running on August 1.

The Belgian was one of the people who came together to create the revised calendar, which runs from August to November, concluding with the Vuelta a España. He told Het Laatste Nieuws that running the race without an audience is a possibility.

Today, organisers of the Palio di Siena horse race, held in Siena, announced that the race was cancelled due to the COVID-19 coronavirus pandemic. Due to be held July 2 and August 16, the cancellation raises questions about how Strade Bianche will be organised.

"In Italy, they're convinced it will work," said Van Damme. "But we know that the conditions under which this may be possible have not yet been laid down.

"Running without an audience is possible, just like a race on a closed circuit. A course can be adjusted. The starting point is that nothing is normal this year. Then let's save what can be saved and do what we can. Organizers will have to adapt."

Other measures such as mass-athlete testing and quarantine measures in the event an athlete tests positive for coronavirus have been raised in other sports as they look to map out a return plan. The cycling world has yet to work out a similar safety plan, though.

Van Damme said that he hopes there would be some normalcy retained in the races themselves, even if the races are audience-free.

"Can athletes experience their sport together? I hope so. If there's no contact, the team sports will fall apart. We'll have to see what we can and can't do. Should there be testing? Should riders be quarantined? Are there other measures needed? We don't know yet."

Strade Bianche, one of the first races to be postponed due to COVID-19, is set to kick off the Italian racing season, which could be revised once more with Il Lombardia and Milan-San Remo possibly moving to August with the Italian National Championships going in the other direction.