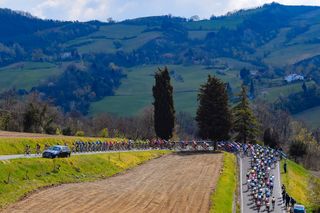 Last week, the UCI presented the revised WorldTour calendar, running from August to November and packing in most of the WorldTour-level races that had yet to be run since the season was interrupted due to the COVID-19 pandemic in March.

Rescheduled races on various national calendars have yet to be confirmed, though both France and Italy have prepared proposals for revisions to their calendars.

According to Tuttobiciweb, 12 further races in Italy will run from August onwards, in addition to the National Championships and the four WorldTour races already confirmed.

The proposal will reportedly be presented to the UCI on Monday, with the sport's governing body setting a deadline of May 20 to sort the various national calendars and compose a full professional calendar.

The new Italian schedule will see Milano-Torino and Gran Piemonte placed between Strade Bianche and Milan-San Remo, while the Settimana Coppi e Bartali will run into the start of September. The run-up to the Giro d'Italia will feature a series of one-day races, including the Giro della Toscana, Coppa Sabatini and the GP Beghelli.

Meanwhile, the Trittico Lombardo of Tre Valli Varesine, Coppa Agostoni and Coppa Bernocchi will be replaced by one race in Lombardy. The Adriatica Ionica Race, Tour of the Alps and Giro di Sicilia will not be held in 2020.

A French calendar is also taking shape, according to WielerFlits, beginning with the Route d'Occitanie on August 1-4 and the stage races the Tour de l'Ain, the Tour du Limousin, and the Tour Poitou-Charentes en Nouvelle Aquitaine coming later in August after the Critérium du Dauphiné.

The Mont Ventoux Dénivelé Challenge is set for August 6, while September and October should see a number of one-day races, such as Paris-Camembert, Paris-Tours and the GP des Nations, all ahead of Paris-Roubaix at the end of October. The French National Championships are currently scheduled for August 21-23, though the mayor of Plumelec recently stated his opposition to holding the event on that date given that France has barred gatherings of over 5,000 people until at least September.

Both sets of calendars are reported proposals at this stage and would have to approved by the UCI before their confirmation. Cofidis manager Cedric Vasseur has already spoken about the challenges of potentially juggling the WorldTour and national calendars.

The Frenchman told Cyclingnews on Sunday that he hoped the squad's obligations to ride in national calendar races could be waived in order to navigate the packed August-November schedule successfully.

"We like to do races like the Tour du Limousin and GP Fourmies, but at the end of the day there needs to be a choice. The WorldTour races are going to be the priority," said Vasseur.