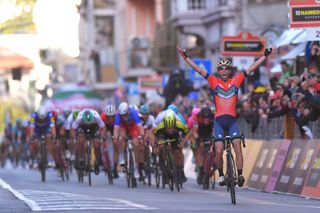 The revised men's racing calendar scheduled for between August and November could be rewritten yet again after doubts emerged about organising the national championships road races on the weekend of August 22-23. The Italian Cycling Federation has requested the UCI to move Il Lombardia from late October to August 8, Milan-San Remo to August 22 and the national championships to October 31.

The UCI announced the new WorldTour calendar last week, trying to put together a new puzzle of races. Federations had to submit their proposed national calendars to the UCI on Tuesday, so that the ProSeries races in Italy, France and other nations could be combined into a complete race calendar.

The leading WorldTour teams are expected to ride some of these races at the same time as the WorldTour calendar as riders seek competition to prepare for the Grand Tours and major Classics. However, travel between countries could be a problem and the UCI is still working with team doctors on a medical protocol to protect riders and staff.

Any racing will only go ahead if governments and local authorities give their permission and if the health of the public and the riders can be guaranteed. The revised calendar was devised to offer hope and objectives to the teams, riders and their sponsors during the COVID-19 coronavirus pandemic.

The idea of holding races behind closed doors or with strictly regulated crowds could have a huge impact on race organisers' plans and budgets. Filippo Pozzato, one of the organisers of the Italian national championships, was quick to realise that his new fan-friendly format would not work if crowds are not allowed to gather at the roadside in a celebration of cycling. The 2020 Dutch National Road Championships have already been cancelled, with the Belgian and French National Championships also in doubt.

The Italian Cycling Federation is trying to save its tricolore weekend by moving the event to October. This would free up the August date for other races and so has led to the shuffling of races in August as part of a new-look Italian calendar. The UCI will ultimately decide on the final race dates, with a full calendar announcement promised for before May 20.

"There are still a lot of doubts about the recovery from the COVID-19 emergency but with the UCI asking us to redesign the calendar, we've created something that allows us to look to the future with optimism," Enzo Ghigo of the Lega del Ciclismo Professionistico said.

"We hope to have August packed with our Classics, including Il Lombardia, Milan-San Remo, Milano-Torino and the Giro dell'Emilia, which can be used to prepare for the Giro d'Italia, the World Championships and the Cobbled Classics of the north."

The Italian race calendar would fit around the WorldTour races, and give a three-month block of racing to the Italian ProTeams and other teams who may wish to race in Italy between August and November.

Strade Bianche on Saturday, August 1 is confirmed as the first race of the new-look season, with Milano-Torino (Wednesday, August 5) and Il Lombardia (Saturday, August 8) creating a demanding opening week of racing. Other one-day races would then come thick and fast from mid-August until the Giro d'Italia starts on October 3.  Milan-San Remo would be held on August 22, with other races before and after Tirreno-Adriatico (September 7-14).

The Italian National Championships would be the last race in Italy in 2020, on the weekend of October 31-November 1, with the hope that tifosi can gather along the roadside. However, this date clashes with the final week of the Vuelta a España, meaning any riders selected for the Spanish Grand Tour cannot compete for the tricolore jersey.