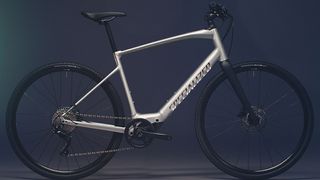 With lockdown measures being eased and commuters looking to avoid public transport on their return to the office, the best electric road bikes and best commuter bikes are growing in popularity and selling out fast.

It seems Specialized anticipated this surge in future commuter cycling with its new Turbo Vado SL. Using the brand’s latest e-bike battery and hub-motor technology, Specialized believes the Vado SL is an apt product solution for urban riders and commuters.

With years of experience in the e-bike game, Specialized has thoroughly tested and evolved its pedal-assistance technology. Much of the company’s research and development resources are spent to develop e-bikes which aren’t overly burdened by the weight of batteries and motors.

View the Vado SL at Specialized.com

With its aluminium frame, the Vado SL rolls along at only 14.9kg, notably lighter than most rival commuter e-bikes. Lower weight means less brake and chain component wear. It also makes for a more agile e-bike to ride and one which is far easier to carry up and down urban stairways, whether they be at an office or apartment block.

The Vado SL combines many diverse features from across Specialized’s broad product portfolio. Providing the pedal-assistance is a 1.95kg electric motor, designed by Specialized’s e-bike development centre in Cham, Switzerland.

Energy density for the Vado SL’s battery pack calculates to 320Wh, which claims to deliver a useable assistance range of up to 130km. Riders who wish to extend that endurance can simply add one of Specialized’s additional batteries, rated at 160Wh, boosting usability by 65km.

Calibrated to allow for a 1:2 pedal-input-to-assistance, the SL 1.1 motor will deliver three modes of assistance (eco, sport, and turbo) up to 240W of seamless assistance, varying with your cadence. Downhill and coasting segments of your daily route or commute suffer no drag from the bike’s motor, which uncouples when not triggered and ceases to assist when speeds go past 45kph.

Mindful of the urban commuting environment, both models available include inbuild lights front and rear, and with the typical commute rarely being a perfectly paved routing of roads, Specialized has borrowed technology from elsewhere to make making the Vado SL more comfortable.

Specialized Future Shock 1.5 sits between the headtube and stem, allowing for 20mm of bump-absorption, but is only available on the Vado SL 5.0 model. Beyond its Future Shock, the Vado SL also rolls high-volume tyres to increase ride quality and traction. The frame has adequate clearance for 700c tyres of 42mm width, or 650b tyres sized up to 47mm.

View the Vado SL at Specialized.com