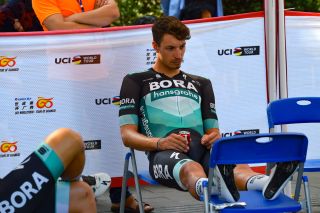 Bora-Hansgrohe, one of two WorldTour teams together with Israel Start-Up Nation to start the Sibiu Tour, enjoyed more success on stage 2 but it came along with an injury to one of the team's key riders, Rüdiger Selig. The German, one of Pascal Ackermann's main lead-out men, crashed into a car and injured his arm and is uncertain to start on Sunday's split stages.

Ackermann still managed to win a reduced bunch sprint on stage 2 in Sibiu, while teammate Patrick Konrad kept the leader's jersey and Gregor Mühlberger continued in the lead of the mountains classification.

Selig's crash came in the run-up to the final climb, the category 3 Calugarul with around 25km to go, where the team planned to hit the gas and shatter the field. Then, Konrad punctured at the base of the climb. Mühlberger still smashed the peloton on the climb after Konrad rejoined and Ackermann managed to win the stage but both were concerned about Selig.

"I'm really happy to restart my season with another victory but I'm also a bit disappointed because my lead-out guy crashed with 25km to go and I still don't know how he is," Ackermann said after the stage.

Selig was examined in the hospital with swelling in his arm and problems moving his shoulder and his team will decide if he can start on Sunday morning.

Konrad said they met their goals of winning the stage and keeping the jerseys, but said "it was a shit situation with Rudi, he hit the car in the last 50 kilometres. This should normally not happen that there is a car. We can't change it."

In the television footage of both stage 1 and Saturday's stage, it appeared there were numerous cars stopped on the side of the road, either parked or pulled over to allow the race to pass. With some tight roads in the small villages leading to the climb, it made for a tricky situation.

But both Ackermann and Konrad praised the organisation and said they were sometimes unexpected situations.

"First I thought maybe it's a small race, it's a not perfect, but then we arrived here - we have a perfect hotel, we have good food, the roads are amazing and the organisation is amazing. I'm really surprised and I'm happy I decided to start my season here," Ackermann said, insisting he was being genuine. "I would say I would come back in the next years."

Konrad said the race is "good and well organised but sometimes there come some situations you don't expect. I think you can always improve something. All in all, it's a nice race.

The race continues on Sunday with a 12km uphill time trial and a 109km final circuit race in Sibiu. "We have another goal with the GC guys, that we take the first and second places in the time trial tomorrow morning," Ackermann said. "We will see how it goes. I want to go for the victory tomorrow and we will see if it's possible. I think the shape is amazing. It should be possible tomorrow."

Konrad said he was still trying to decide whether to use a road bike or his time trial machine for the morning's stage. "The climb tomorrow is not that special that you can say there is no possibility of a time trial specialist can win it. There are some guys with their eyes on the time trial. For sure [I will go] 100 per cent and I hope I can defend and when I win the stage as well it's double," he said.

Many of the riders have been wearing face masks at the stage starts to keep the coronavirus at bay. Ackermann was diligent to wear his during the post-stage interview and on the podium.

When asked what he would say to those who resist wearing them, he said, "I think we are not scared and we have no problems with the virus but there are others around the world and I think we have to take care of them. It's just safety first to take the masks. I think for us it's not a big problem to wear them because they're light and you can breathe really good. I think we have to take care of others around the world."

He and the rest of the riders hope they can continue as the virus begins an alarming resurgence in some areas of Europe. Ackermann is aiming at the Tour de Pologne and then the Vuelta a España, while Konrad and Mühlberger are due to race the Giro d'Italia and Tour de France, respectively.