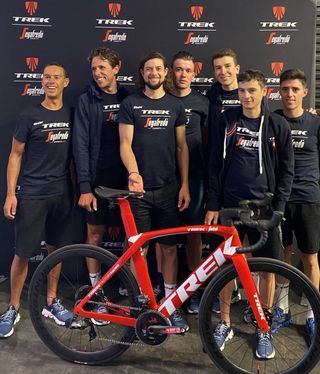 Trek-Segafredo's Tour Down Under team including Richie Porte and world champion Mads Pedersen inked their names in a Trek Madone SLR Disc with Force Etap AXS 12-speed that will be auctioned off to benefit victims of Australia's bushfire crisis.

Mattia Mauri, Operations Manager of Segafredo Zanetti Australia, announced the auction which begins today and will end with the Tour Down Under to benefit the Australian Red Cross.

The group already raised $1200 funds by auctioning jerseys signed by Porte and Pedersen.

"Segafredo Zanetti Australia is proud to offer you the unique opportunity to get your hands on a one-of-a-kind professional bicycle, valued at $10,749.00, signed by Trek-Segafredo’s 2020 Men’s Tour Down Under team," the auction description reads.

"The auction is open to everyone world-wide until the final Tour Down Under race 26th of January 2020 at 7:45pm.

"All proceeds will go to Australian Red Cross Disaster Relief and Recovery to help provide Emergency grants for over 2,000 homes that have been lost during the bushfires along with providing evacuation and relief centers."

The wine country which the Tour Down Under runs through suffered enormous damages in the December's Cuddle Creek fire, but the size of that blaze was a mere fraction of the enormous bushfires that continue to ravage New South Wales and Victoria. Damage and economic impacts have been estimated to be in the billions of dollars range.