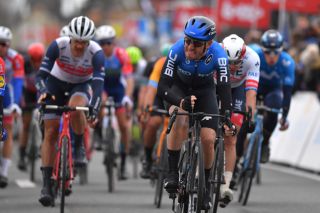 NTT Pro Cycling’s Giacomo Nizzolo bangs his handlebars in frustration after only being able to manage second place at the 2020 Kuurne-Brussel-Kuurne (Image credit: Getty Images Sport)

NTT Pro Cycling's Giacomo Nizzolo was the best of the rest behind Kuurne-Brussel-Kuurne winner Kasper Asgreen (Deceuninck-QuickStep) in Belgium on Sunday, leading home the reduced-bunch sprint ahead of UAE Team Emirates' Alexander Kristoff.

"It's never nice when you win the sprint for second place," Nizzolo said in a video posted on his NTT team's website, "but overall I felt good today, so we can be happy about the performance, and we're looking forward to the next races now."

Asgreen managed to jump across to the day's main breakaway with 30km to go of the second of the two Opening Weekend races, and only Roy Jans (Alpecin-Fenix) and Boris Vallée (Bingoal-Wallonie Bruxelles) from the break were able to follow the Dane as he forged on, with Asgreen dropping first Jans, and then Vallée, and holding off the chase group to take what was a memorable solo victory in the West Flanders town of Kuurne.

Asgreen continues to soar up QuickStep hierarchy with Kuurne victory

"I felt good all day, so that's definitely a good thing, and there was another rider stronger than us today, but we'll keep going," added Nizzolo, happy to praise Asgreen's lone effort.

Meanwhile, UAE Team Emirates had Mikkel Bjerg in the day's breakaway, but when the Dane fell out of contention due to a rear-wheel puncture ahead of the Oude Kwaremont climb with 50km to go, it was left up to his teammates to try to deliver their sprinter, Alexander Kristoff, to victory. When Asgreen proved impossible to catch, the Norwegian had to settle for the third spot on the podium, having missed out to Nizzolo in the sprint.

"When I made the first selection over the Kwaremont climb, I knew the legs were good," Kristoff said on the UAE Team Emirates website. "I went a bit early in the sprint but it's still a good result for me.

"Yesterday didn't go to plan so to get on the podium today is really nice," he added, referring to him being a non-finisher at the Omloop Het Nieuwsblad on Saturday, which was won by Trek-Segafredo's Jasper Stuyven.

"Bjerg had a strong ride, too, but had some bad luck with the puncture," Kristoff said. "But with the high level here, I think a podium is a good result for the Opening Weekend."