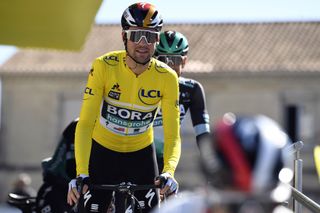 Max Schachmann on his way to victory at Paris-Nice earlier this year (Image credit: Bettini Photo)

Maximilian Schachmann has confirmed he is in talks with multiple teams over a possible transfer for 2021 but is keen to resume racing before he makes a decision, with the Tour de France and the Classics forming the basis of his season.

Schachmann is one of the top riders out of contract at the end of 2020. After spending his first two years as a pro with Deceuninck-QuickStep, the German has shone in the colours of German team Bora-Hansgrohe, winning three stages of the Basque Country and the German road race title in 2019, as well as placing top-five in Amstel Gold Race, Flèche Wallonne and Liège-Bastogne-Liège.

He enjoyed an even stronger start to 2020, with second overall at the Volta ao Algarve followed by victory at Paris-Nice, which has left the 26-year-old with a good negotiating hand, even if the delayed season has pushed back transfer talks.

"First of all, it's a special situation for all of us. I was lucky I had a good season so far, and right now I have good talks with different teams," Schachmann told reporters, including Cyclingnews, from a team altitude camp in Austria on Tuesday.

"It's a new situation for everyone – for the riders and the managers. Normally every season you have a deadline, but now we’re racing into November. I want to return to racing and do my best, then take it from there."

While Schachmann was originally set to ride the Giro d’Italia and Vuelta a España, along with the Ardennes Classics, his 2020 schedule has completely changed, as he confirmed on Tuesday.

He will now ride the Tour de France in August and September before skipping the Giro d’Italia in order to be able to ride the Classics in October. As well as the familiar, hilly ground of the Ardennes, he'll also get a taste of the cobbles, with debuts at the Tour of Flanders and Paris-Roubaix in the works.

"I had a big impact in the decision," Schachmann said. "You can't compare the original season to the new season because so many races are overlapping. The original plan wouldn’t have been possible. I'm happy I got the freedom to decide, and think I got one of the best possible plans for the new season."

Schachmann will head to the Tour de France in a team that also contains GC contender Emanuel Buchmann, who finished fourth overall last year, and sprinter-puncheur Peter Sagan, who will be aiming for an eighth green jersey.

Schachmann will have the freedom to hunt stage wins in the medium mountains but the Tour is also a testing ground for his potential as a future Grand Tour contender.

"In my opinion and in the team’s opinion, it’s something we have to figure out," he said of his GC credentials.

"I have shown my abilities in different situations but still I have to improve my climbing skills. The most important thing is how you can perform over three weeks and that’s something you can’t really predict. You have to figure it out by doing it, by seeing how your body reacts, especially from day 14 onwards. That was the plan last year but unfortunately I crashed out, so this year we're going to repeat the process."

As for the Classics, Schachmann will surely be one of the top favourites for Liège-Bastogne-Liège after last year's podium finish, but it will be interesting to see how he fares at the Tour of Flanders and even Paris-Roubaix.

The new calendar, coupled with Sagan's absence due to his commitments at the Giro d'Italia, have opened the door to more races that could potentially suit the German all-rounder.

"For a rider like me, it’s easier to race Flanders with all the small hills. There are hard cobblestones but the focus is not only on the cobbles," he said.

"Paris-Roubaix is quite a big challenge but this year’s calendar makes it possible to go and test it so i’m going to try. If it works it works and if not it doesn’t."