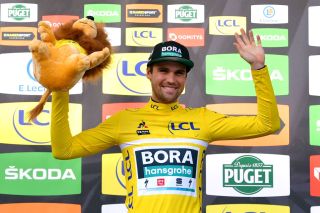 When Bora-Hansgrohe's Maximilian Schachmann took the overall win at French WorldTour stage race Paris-Nice on March 14, few could have predicted the terrible toll on the world that the coronavirus was about to wreak in the months to come.

It was cycling's last major race, but Schachmann was somewhat of a surprise overall winner, taking victory on the opening stage and then performing well throughout the rest of the race to retain his lead against Tiesj Benoot (Sunweb) and EF Pro Cycling's Sergio Higuita.

"I really can't complain about the results I've had so far in 2020," Schachmann said on his team's website on Sunday. "The training throughout the winter seems to have paid dividends, and I'm also benefitting more and more from my growing experience as a rider."

Paris-Nice was shortened by a day as the coronavirus crisis took hold, and most other sporting events around the world were cancelled, but there seemed to be few signs that 26-year-old Schachmann wouldn't have hung on to win regardless.

Bora-Hansgrohe manager Ralph Denk: We'd be ready to race right up until Christmas

"I think I've just been developing consistently over the past few years," he said. "At our [pre-season] training camp, I already noticed that I seemed to have emerged from the winter months with very strong legs. The difference to previous years is that I've been taking on the leader's role more often, and my gains in performance are also being reflected in my results. When you're working as a helper, the developments are not necessarily be so clearly visible, although they may still be occurring."

Asked whether he was considering making the transition from Classics rider to stage-racing star, Schachmann said that he was leaving his options open.

"You can't get much longer than Paris-Nice, with the exception of the Tour de Suisse and the major tours," the current German road race champion said. "However, I'd still like to leave open to what extent I could pursue these longer races in the future. I'm happy with my current level, but I hope that I can expand my spectrum of abilities as a rider in the years to come."

Liège-Bastogne-Liège, which should have taken place on Sunday, but has been postponed – and now looks likely to take place at the start of October – was one of Schachmann's big goals for this season following his third place there last year behind his then Bora-Hansgrohe teammate Davide Formolo (now at UAE Team Emirates) and winner Jakob Fuglsang (Astana).

"I'm not really someone who spends a lot of time mulling over the 'what ifs,'" said Schachmann, with regards to having seen what was clearly good form fall by the wayside as a result of the forced lay-off from racing.

"Instead, I'm trying to do my best despite this difficult time, and to continue training," he said. "I already have my sights set on the next race, even if it will probably be the Tour de France as opposed to Liège-Bastogne-Liège. At the end of the day, you have to still keep yourself motivated, and my end goal is to arrive at my next race in the best form possible."