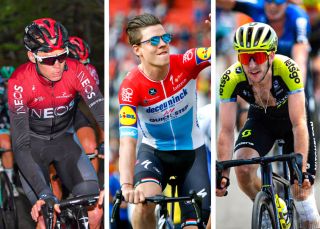 With almost 1,000 WorldTour and Pro Continental riders out of contract at the end of the season, cycling would normally be a hive of activity on the transfer front. However, with the sport on hold and teams consolidating their positions, the market has come to an abrupt halt.

That said, there are still a number of high profile riders up for grabs, and Cyclingnews – with the assistance of data from Fuoriclasse - has picked the 10 biggest high-profile riders out of contract at the end of the season.

The British rider's last contract extension came in the summer of 2017 and since then the multiple Grand Tour winner has endured a rollercoaster period. Following a Tour de France win in 2017, he picked up both the Vuelta a España and Giro d’Italia crowns to hold titles in all three Grand Tours simultaneously. A podium in the 2018 Tour followed but Froome then suffered a life-threatening crash that completely derailed his 2019 season.

It’s unclear whether the current racing hiatus is a benefit or not for the Ineos rider. While it allows him further time to recover, it also ensures that what’s left of the calendar year will be a frenetic land grab for results. Froome will have a short window to prove he can return to his very best.

However, if there's no racing until 2021, then the situation for Froome becomes even less clear. At 34 – hitting 35 next month – he is nearer the end of his career than the start, and while he was rightly paid the salary of the best Grand Tour racer in 2017, times have changed. Egan Bernal is here and cycling, like all sports, is under economic pressures like never before.

That said, it's hard to see Froome finishing his career anywhere but Ineos and alongside Dave Brailsford. If racing resumes and Froome wins a Grand Tour, expect a fresh deal almost immediately.

At the start of the year it looked as though this season was going to be a seminal period in the Frenchman’s career. After a couple of lukewarm showings at the Tour he announced that the Giro would be his main focus but, with the Tour de France his new focal point, Bardet finds himself back at square one and targeting a race he wanted to escape.

French riders tend to remain on domestic squads and there's unlikely to be a huge bidding war for his services but this might also be the point at which both rider and team seek new directions. AG2R have several riders, including Oliver Naesen and Pierre Latour, to re-sign.

Cofidis might be tempted but the rumours in France suggest that interest could come from Mitchelton-Scott or Trek-Segafredo. Those moves might feel rather left-field right now, but these are left-field times and Bardet would be ultimately cheaper than the Yates twins and is younger than the likes of Richie Porte.

There’s more chance of Donald Trump finding a vaccine for COVID-19 than Pinot leaving FDJ but this list is about the biggest riders out of contract so the Frenchman makes the cut.

After winning the Vuelta in 2018, Yates failed to maintain those lofty standards the following year but his two stage wins in the Tour and his all-round attacking nature ensured that 2019 wasn't a washout.

While Yates is probably content to stay – he turned down more money elsewhere last time he was out of contact – and Mitchelton would like to keep him (and his brother), the economic landscape could determine how the situation plays out.

Mitchelton were already looking for a sponsor in order to alleviate the financial burden on owner Gerry Ryan but the pandemic has hit the team hard, with cuts made already. Those measures may be seen as preventative but Ryan funds not just a men's team but also a women's squad and, with so many riders out of contract this year, the team may be forced to let some of their crown jewels leave as they look to balance the books.

The consensus has always been that the Yates brothers come as a package but the fact is they don't. They're very different and have their own agents - although they too are related – and this year could be the tipping point that sees one of the Mitchelton riders depart.

Adam would be less expensive on the market given he has never won a Grand Tour and his best three-week performance came almost four years ago but he remains a highly talented bike rider, and one who can win over a number of terrains. His 2019 season saw him come close to winning two WorldTour stage races, and his one-day tally was consistent if not spectacular.

After a debut season at Trek that was punctuated with illness and inconsistency, Porte returned to the fore in January with a resounding win at the Tour Down Under.

The damaging aspect for Porte in terms of the decimation of the racing calendar isn’t that the Grand Tours have been moved but that a glut of week-long stage races have been scrapped or postponed. Those events were Porte's specialty and he was signed by Trek to win them regularly. With those races off the table or, at the very least, limited, Porte only has a short window to remind the cycling world of his value.

At 35, there are also younger prospects coming through but the Australian is still a worthy team leader. Trek have 10 riders out of contract this year and it's the direction in which they decide to take their squad that will likely shape whether Porte is re-signed.

Valgren's best performance last year came at the World Championships, where he finished sixth behind his teammate and winner Mads Pedersen. The fact that Valgren's leading ride came in Danish kit rather than his team livery spoke volumes of an underwhelming campaign that began with a Classics washout and only saw shoots of recovery after the Tour de France.

The 28-year-old started this year slowly, too, although that in itself can't be criticized given that his main goals were later in the spring. But the fact that NTT were already facing uncertainty over their long-term future cannot be ignored. Valgren's asking price will surely have dipped from where it was two years ago, yet he remains an exceptional talent and a class act who can compete in almost every one-day race.

Still under 30, teams will be convinced that he can return to the level he showed during his time at Astana. NTT boss Bjarne Riis will have to try and convince his countryman that he alone can help.

If Naesen is serious about winning a Classic, then leaving his French home might be his foremost option. AG2R are good, but they're not one of the leading one-day teams when it comes to the Spring, and while they offer a huge amount of stability in uncertain times, there's a feeling – certainly within the peloton – that Naesen could lead a stronger squad.

On the flip side, the market could see AG2R pick up several highly talented bargains from struggling teams but, if they stand still and Naesen is offered a brighter option, then expect him to move.

Bora have 13 riders out of contract this season but none are as important as Schachmann. The German won Paris-Nice in resounding style and, at 26, he's one of the youngest riders on this list. His age means that he still has plenty of room to improve, while some here might be past their peaks.

A strong all-rounder, Schachmann has only ever started two Grand Tours and finished one, so there’s obvious potential for teams to build around. The Bora management is unlikely to let the German national champion go without a fight but they at least have cover in the likes of Emmanuel Buchmann.

Jungels will attract attention from virtually every team because he's versatile, relatively young (27), and will be cheaper than most of the options on this list.

His slight regression in Grand Tours suggests that teams will be willing to take a punt on his credentials over three weeks while relying on his time trialing and one-day strength to net a few wins throughout the year. With Patrick Lefevere facing possible cuts and with Remco Evenepoel and Julian Alaphilippe tied up for the next few seasons, the Belgian might be forced to let Jungels leave.

Lefevere is no stranger to seeing talent depart and he has relied on a second-to-none scouting programme to find fresh faces in the past. Expect that tactic to be used throughout the coming months.