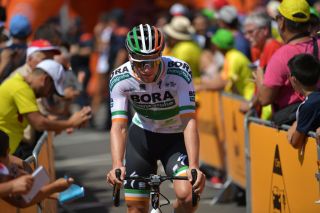 Victorious in Alicante and on the far side of Spain in Oviedo in the second week, Sam Bennett (Bora-Hansgrohe) had been looking for stage win number three when he made it into the epic daylong break on stage 17 to Guadalajara on Wednesday.

But the Irishman ended up falling foul of a finely played strategy by Deceunink-QuickStep, with huge strength in numbers - all the team bar one were in the break - and Philippe Gilbert in top form.

"It was Deceuninck against me," Bennett told Cyclingnews, sitting outside his team bus half an hour later as he went through the last kilometres one of the toughest 'transition' stages in recent Grand Tour history.

After Zydenek Stybar went on a solo mission with 2.2 kilometres to go, Ineos shut things down but didn't quite finish the job, and Bennett made a move with about 600 metres to go, similar to how his second victory in Oviedo played out.

It could have worked out but instead, after a particularly tough stage, Gilbert worked his way across and ended up striking past Bennett for his second win.

"In the final, they were just one-two-ing me and everybody was watching me, and if I didn't make a move the race was going up the road," Bennett said.

"I had to attack and attack hard enough to make sure nobody could sit on my wheel and make a gap and try to hang on.

"But Gilbert's a former world champion, one of the best riders in the world, especially in that kind of final. He's a very hard guy to beat."

"When I had the gap and turned around and saw it was him, I was like 'oh, please no, anyone but this guy," he recollected with a wry laugh.

Bennett echoed the sentiments of many of the Vuelta a España peloton, declaring the race - which blew apart from the gun on a 220km day and averaged over 50kph - was a kind of stage that he'd never done before.

"I've been in echelons in the wind in stage races like Qatar but I've never done one like that as long. I was in the front group straight away but I was thinking 'there's no way this is going to continue all day.'

"A couple of hours later I was still there but I blew up so many times in that race, I just had to keep going and then the legs go round and everybody was tired. It was a super hard day."