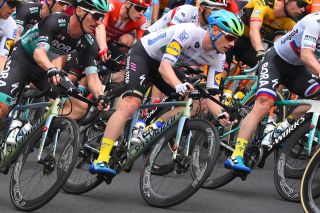 Sam Bennett had been hoping to impress on his debut with Deceuninck-QuickStep but was unable to rub shoulders with sprint rivals Caleb Ewan (Lotto Soudal) and Elia Viviani (Cofidis), finishing 16th and shaking his head in disappointment as he crossed the finish line at Sunday's Schwalbe Classic Criterium.

Ahead of him, Ewan celebrated his fourth victory in five editions of the Tour Down Under warm-up race, while Viviani took consolation with second place after coming up late. Bennett's lead-out man Michael Morkov fought to finish seventh.

Bennett had been expected to fight for victory but the Deceuninck-QuickStep lead-out train never really formed on the final laps as EF Pro Cycling took control and Ewan and Viviani ensured they were well placed.

Tour Down Under offers up first Viviani versus Bennett sprint clash

Bennett can only hope to learn from any mistakes and fight back when the Tour Down Under begins proper on Tuesday.

"It was pretty slippy out there. I just lost position. But we'll learn from the mistakes and go again," he said, highlighting the wet and greasy conditions on the Adelaide city centre circuit after several rain showers hit the hour-long race.

Bennett had joked before the race that he didn't want to be "the first sprinter not to win with Deceuninck-QuickStep" after his move to the Belgian team to replace Viviani. His performance in the criterium, however, was not about pressure.

"No. Even before the last corner, we were so far back that by the time we came out of it we were too far behind," he explained, going into the technical details of racing on a fast but wet circuit and trying to take on criterium experts like Ewan.

"When it's wet, up front, they're already sprinting for 20 metres. We had to try and catch that and then go over the top. I exploded before 200 metres to go. There was nothing I had left and nothing I could do."