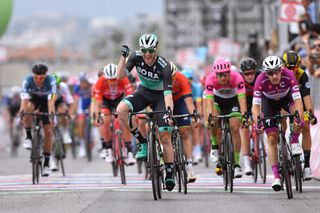 Sam Bennett gets the better of Elia Viviani (right) on stage 7 of the 2018 Giro d'Italia (Image credit: Getty Images)

A new season means new sprint rivalries, and the Tour Down Under will see the first sprint-off between Elia Viviani and Sam Bennett – the past and present lead sprinter for Deceuninck-QuickStep.

Viviani won 18 races with Deceuninck-QuickStep in 2018, and another 11 in 2019, including a first-ever stage at the Tour de France. He would have loved to have ridden the Belgian team's lead-out train to further victories in 2020, but received an offer he couldn't refuse from Cofidis.

QuickStep manager Patrick Lefevere knew he could replace Viviani with Bennett in the latest incarnation of his sprint unit. Bennett became Lefevere's preferred option when he fell out with Bora-Hansgrohe after being snubbed for a place in the Grand Tours.

Sam Bennett to debut with Deceuninck-Quickstep in Australia

New De Rosa track bike spotted at Tour Down Under

Caleb Ewan (Lotto Soudal), André Greipel (Israel Start-Up Nation) and Jasper Philipsen (UAE Team Emirates) will be major threats in the expected four sprint finishes at this year's Tour Down Under, but the battle between Viviani and Bennett tops the bills and sparks the most intrigue.

Can Bennett successfully fill Viviani's shoes at Deceuninck-QuickStep? Will Cofidis be able to produce a fast and smooth lead-out train for Viviani to strut his stuff? Or will other sprinters, including young guns such as the much-admired Italian neo-pro Alberto Dainese (Team Sunweb), Britain's Gabriel Cullaigh (Movistar), Giacomo Nizzolo (NTT Pro Cycling) and Kristoffer Halvorsen (EF Pro Cycling) steal their thunder?

We will see in Sunday's Schwalbe Classic warm-up criterium, and especially next week during the Tour Down Under.

"There's always pressure, but I don’t think it ever compares to the pressure I put on myself, so it's okay," he added.

"Joining a new team, you want to start on a high and to have good morale. The guys have confidence in me, and the earlier you can get that win, the easier it is to get into that flow."

Viviani watched on from a distance as Bennett spoke to the media about their approaching sprint-off. There's no bad blood between the two, but there can be little room for friendship between sprinters when they then have to fight shoulder-to-shoulder at 70kph.

"It's not a battle between me and Deceuninck-QuickStep – it's a battle to win. The important thing is to hit the finish line first," Viviani said, playing down a direct rivalry when he stepped up to the microphones and Bennett quickly headed off.

Viviani puts his trust in Cofidis

Viviani and Bennett last sprinted against each other at the 2019 Prudential RideLondon-Surrey Classic, with Viviani also beating the Irishman a week before when he won the European road race title.

The Italian arguably has the biggest sprint profile in the peloton after his two seasons at Deceuninck-QuickStep, but Cofidis are still a work in progress when it comes to his lead-out train. However, Viviani refuted suggestions he may try to ride on the Deceuninck-QuickStep train to victory at the Tour Down Under.

"No. I'll stay on my new team's wheels. I believe in them, for sure," he said bluntly, but not totally convincingly.

"I made the move to Cofidis because I really believe in this new project. We've got Simone Consonni in my new lead-out, while Fabio Sabatini has been with me for two years. I know the winning mentality of Deceuninck-QuickStep and how they work, but I'm not going to just follow them."

Viviani did concede that Bennett and the Deceuninck-QuickStep train, led by Danish road race champion Michael Mørkøv, could dominate the sprints and so give Bennett an important edge.

"Sam won a lot of races last year and now is at Deceuninck-QuickStep. I know that team really well, so I think he's going to be a big contender," Viviani admitted, putting Bennett top of his list of rivals.

"Caleb Ewan is also a threat because he had a realty impressive season last year and will want to repeat that. There are some big names here for the sprints. I think Greipel is back to his best, and then there's also the young sprinters trying to come through. The recent years have warned us to watch out for the young guys. Not a lot of people know him, but 21-year-old Italian Alberto Dainese, who rides for Team Sunweb, is really fast. I think he's one of the youngest sprinters in the WorldTour but he's one of the strongest. There's also Halvorsen of EF Pro Cycling and Philipsen of UAE Team Emirates, who won a sprint last year. I think every sprint will be a really hard battle and not just between the biggest names."

Bennett is modestly looking at that all-important ice-breaker first win, so he can follow in the footsteps of Mark Cavendish, Marcel Kittel, Fernando Gaviria and Viviani, and avoid being the first Deceuninck-QuickStep sprint failure.

"It's going to be hard to get a stage win here, but I'm looking forward to it. I want to be up there and compete. Personally, a stage win would be nice, and then we can see how greedy we can be."

Viviani is also confident of landing some early success.

"My form is close to that of last year, so we just have to see the level of my rivals and how good we are," he said. "I've had a good winter, so I'm optimistic about having another successful season."