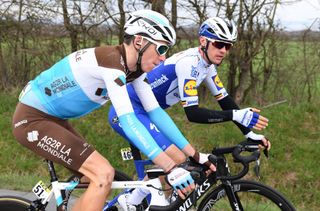 AG2R La Mondiale leader Romain Bardet has told the French press that he hopes that some form of a Tour de France may still be able to be held this summer, if the coronavirus pandemic in France is under control by then, but that he agrees with the postponement of the Olympic Games.

"From my point of view – and even though I'm not particularly qualified to talk about it – I think the two cases of the Tour de France and the Olympics are quite different," Bardet told L'Equipe on Tuesday, explaining that the smaller, more domestic scale of the Tour might make organising the French race a possibility.

"It seems to me that it might be less utopian, if the pandemic has been controlled by then in France, to organise the Tour de France," said Bardet. "We're all going through difficult times, but it would be a great sign if the Tour could be held in July. It would mean that the health situation had improved, and that we were on the right track… But it's probably too early to say whether that's possible."

Bardet frustrated with riding on at Paris-Nice during coronavirus pandemic

The Frenchman expressed doubts as to the benefit of carrying on at Paris-Nice as the coronavirus crisis in France worsened. The event proved to be his, and much of the pro peloton's, last race before the sport's shutdown.

Bardet's first goal for the season had been the now-postponed Giro d'Italia, which he was going to ride for the first time, eschewing the Tour in favour of readying himself for his second big goal: the hilly road race at the Tokyo Olympic Games in July.

The announcement this week that the Games would be postponed to a date that will likely be in 12 months' time was, however, Bardet said, "expected".

"Given the uncertainty of the current situation that the world's in, delaying the Games seems reasonable and logical," he said. "I didn't know how anyone was going to be able to take part in the Olympics while there was still so much uncertainty and the world was in the state it's in.

"It would be selfish of me to only be concerned by the sporting aspect of everything that's happening," Bardet continued. "Instead, I'm trying to look at things as a citizen of the world, as this situation is so catastrophic.

"It's difficult to look at the world through the eyes of a sportsman anymore," he said. "I've lost the thread of my season a little, especially as we don't know when we're going to race again. Everyone's thinking beyond sport now."

Now, in lockdown in the France with his family, Bardet is dreaming of racing again, but enjoying some sort of a normal life – despite what are far from normal circumstances for everyone.

"I'm lucky to have recently become a dad, and I spend all my time with my wife and my son, who is now one month old," he explained. "We're obsessed with the news, but we're trying to be positive. As a professional rider, it's usually hard to lead a normal life, but the current situation is truly extraordinary, and much of what's happening has left me speechless," he said.