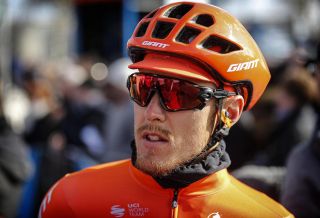 Matteo Trentin has sparked debate about the impact of the coronavirus Covid-19 on the 2020 Grand Tours, suggesting that the Giro d'Italia, Tour de France and Vuelta a España could be combined to create a special, single and unique Grand Tour stage race as a "great way to reunite all the people with a bike race after this horrible time."

The Italian CCC Team rider picked-up on a suggestion first made by Spain's Ivan Cortina of Bahrain McLaren and created the #3GTn1 hash tag to garner reaction on Twitter. One Twitter poll organised By French Bunch showed 57 per cent of people were in favour.

Trentin suggested it could be a "one-shot event to restart all together" before a return to a usual race calendar in 2021 when Grand Tours would again last three weeks.

Coronavirus: how riders are coping with the lockdown
Calendar of coronavirus race cancellations
Coronavirus and cycling: A timeline of the pandemic's effect on the sport
Hinault: If the Tour de France needs to be cancelled, let’s not hesitate

Trentin gave more details of his idea in a second post, suggesting the super-sized 2020 Grand Tour would still consist of 21 stages, with seven stages each in Italy, France and Spain, divided by rest days.

"Why not organize only one GT this year? Start in Rome, passing through Madrid, finish in Paris. All the best on the start and a great way to reunite all the people with a bike race after this horrible time! #3GTn1" Trentin wrote on the social media platform.

Former UCI President Brian Cookson has suggested all three Grand Tours should be shortened to two weeks to make space in any future post-Covid-19 and 2020 race calendar. However, neither this or Trentin's idea are likely to be accepted by the Grand Tour organisers ASO, RCS Sport and Unipublic due to economic reasons. They depend on the income from three weeks of racing that includes television rights from around the world, start and finish hosting fees and sponsorship.

They could combine the costs of putting on a single Grand Tour, but Tour de France organiser ASO, who reported a profit of around €45 million in 2017 for all of their events, would surely face the biggest loss of income.

However, Trentin's idea sparked debate on Twitter, with more than 130 messages, 500+ retweets and thousands of likes. It appears to have highlighted people's interest in the Grand Tours taking place in some form when possible after the worst of the coronavirus pandemic has passed.

What do you think? Let us known in the comments section below.

Why not organize only one GT this year? Start in Rome , passing through Madrid , finish in Paris. All the best on the start and a great way to reunite all the people with a bike race after this horrible time! #3GTn1March 24, 2020