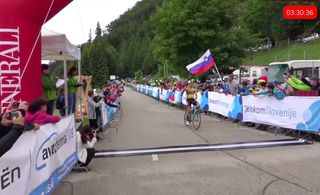 Primoz Roglic (Jumbo-Visma) soloed to the victory at the Slovenian Road National Championships on Sunday. He emerged as the new national champion following a two-man battle against Tadej Pogacar (UAE Team Emirates) after the pair forged clear of their rivals on the final eight-kilometre climb to Ambrož pod Krvavec.

"It is really wonderful that the situation allows us to finally race again and to do what we do best, racing our bikes. I am therefore very happy that I was able to take the national title in my first race of the season," Roglic said in a team press release.

"It was a tough race with a very tough final climb. Given the results in the spring, Tadej was the favourite and it was certainly not easy to beat him. I had reckoned the climb well in the past few days, so I knew where I had to attack.

"The fact that I take the victory here in my first race of the season feels very good. I am definitely not in top form yet, but I am already looking forward to the upcoming races. I also want to thank the team for making the effort to support me in Slovenia. That means a lot to me."

Slovenian National Championships to go ahead on June 21

The UCI announced a revised road racing calendar in May that positioned many of the National Championships on the August 22-23 weekend. However, some nations continue to face various levels of lockdown along with public health and travel restrictions that could prevent such events from taking place.

Organisers of the Slovenian National Championships announced in early June that their men's and women's road races would go ahead as originally planned on June 21. It is the only National Championship in Europe that has taken place on its original date following the interruption of the cycling season due to the COVID-19 coronavirus pandemic.

Slovenia began lifting its lockdown restrictions in the middle of May and was the first country in Europe to declare an end to the COVID-19 coronavirus in its country.

Roglic and Pogacar were among those riders expected to participate in the elite men’s road race. The race was 146km, starting in Dvorje and tackling six laps before finishing with an eight-kilometre climb that averaged 7.9 per cent to Ambrož pod Krvavec, which is just over 1,000m above sea level.

A breakaway of four riders cleared the field on the first circuit that included Ziga Horvat (Adria Mobil), Jan Tratnik (Bahrain McLaren), Nik Cemazar (KK Kranj) and Matic Groselj (Ljubljana Gusto), and gained two minutes. Horvat lost contact with the leaders on the fourth circuit but the breakaway carried on with a two-minute advantage.

The break was reduced to two - Tratnik and Cemazar - as they raced toward the final climb but their lead dropped from 1:30 to 40 seconds with 10km to go, and then just 25 seconds at the start of the climb.

As the race shook out on the final climb, however, the last man standing in the breakaway, Tratnik, was caught by new leaders Pogacar and Roglic.

The pair emerged as the strongest riders on the ascent to the finish line, with Pogacar reportedly sitting on Roglic's wheel through the last two kilometres. In the end, Roglic distanced his rival and soloed to the finish line 10 seconds ahead of Pogacar and claimed the national title.

Ursa Pintar (Ale BTC Ljubljana) won for the national title in the women's 68km race, which completed two local circuits before the climb, and started after the men's race passed through on their fourth circuit.

The national championships for other nations around the world are expected to be held from August 22-23.