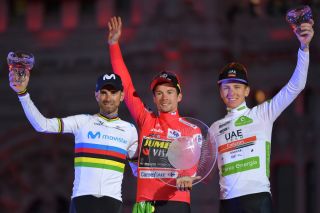 The Slovenian National Championships will go ahead on Sunday, June 21 with Primož Roglič (Jumbo-Visma) and Tadej Pogačar (UAE Team Emirates) among those expected to participate in the elite men’s road race.

The event is the only national championship in Europe currently slated to take place on its original date following the interruption of the cycling season due to the COVID-19 coronavirus pandemic.

When the UCI published a revised calendar last month, national championships were assigned for August 22-23 – the weekend preceding the postponed Tour de France – though countries including Belgium and Italy have already outlined later dates for their championships.

Roglič: We should assume the best about the new calendar

Pogačar: There's even less pressure on my shoulders for the Tour de France

Slovenia began lifting its lockdown restrictions in the middle of May, when it became the first country in Europe to declare an end to the COVID-19 epidemic within its borders, and the Slovenian Cycling Federation (KZS) has confirmed that the elite and under-23 national championships for men and women will take place in Cerklje na Gorenjskem, with an uphill finish at Ambrož pod Krvavec.

“Since all the best riders are still at home at this time, we hurried a bit with the implementation of the national championship,” said former professional and federation vice-president Martin Hvastija on the KZS website.

“Of course, we had some concerns about riders' form, but during this time everyone is preparing for the crowded period that follows shortly afterwards, with altitude training and the beginning of the season in August.”

The event marks the resumption of competition in Slovenia. The Tour of Slovenia had been due to take place from June 10-16, but the 2020 edition of the race was cancelled in March due to the coronavirus pandemic.

Although the races are short in distance – 146km for the men’s event and 68km for the women’s event – the parcours is a difficult one, with laps of a circuit around the village of Cerklje na Gorenjskem preceding the stiff climb to the finish at Ambrož pod Krvavec, which is just over 1,000m above sea level.

The Slovenian Federation website has listed Roglič and Pogačar among the likely participants, though both riders have yet to confirm their racing programmes ahead of the Tour de France, which is scheduled to get underway in Nice on August 29. Roglic and Pogacar finished first and third, respectively, on last year’s Vuelta a España.

Speaking to Cyclingnews last week, Pogačar suggested that he would train at altitude in Sestriere in July before resuming competition at Strade Bianche on August 1. He would then ride either Milan-San Remo or Il Lombardia before participating the Critérium du Dauphiné.

Roglič is scheduled to participate in altitude training camp in July before riding the Tour de l’Ain and the Dauphiné ahead of the Tour.