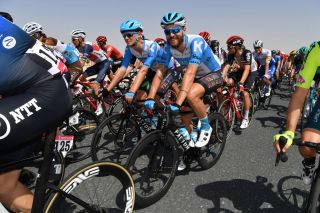 Rick Zabel has become the latest Israel Start-Up Nation rider to extend his contract with the team. He'll stay at the WorldTour squad for two more years, the team announced on Monday.

The German, a new signing this year from the defunct Katusha-Alpecin squad, is the seventh rider to pen a two-year renewal since May. Tom Van Asbroeck, André Greipel, Mads Würtz Schmidt, Jenthe Biermans, Matthias Brändle and Alexander Cataford have all done the same.

"I'm happy to be in the boat for a few more years with this special team," Zabel said in an ISN press release. "[It] has a special story – we are kind of peace ambassadors. I like the story of the team and also, I like the spirit of the team.

"We are kind of underdogs, but we can achieve big things and we can do a lot bettre than a lot of people would expect."

Zabel, 26, has only taken part in four races with Israel Start-Up Nation since signing with the team, including the Tour Down Under and UAE Tour, the latter of which was cut short due to the COVID-19 pandemic and an outbreak at the race.

He'll restart his season with the Vuelta a Burgos and Milan-San Remo and said that riding Grand Tours and Classics are among him aims for the rest of the year, with the German named on the team's long list for the Tour de France.

"I trained pretty hard during the Corona time to be in a good shape when this season restarts," he said. "I think I showed in the UAE Tour that I'm always good for a result too so I'm looking out for some results for myself. Long term goals – of course, I want to ride Grand Tours and I want to ride the Classics and of course I also want to win races."

Zabel will be joined at the team next year by four-time Tour de France winner Chris Froome after the Briton's transfer from Team Ineos was announced last week. Fewer than half of the team's current roster are under contract for 2021, meaning that there's plenty of space to reshape the squad around ISN's star new signing.

For his part, Zabel has impressed team staff during his short time at the team, with team manager Kjelll Carlström commenting on his positive attitude and work in the lead out train.

"Rick has only been with us a few months, but the way he conducts himself and how he strengthens especially the lead-out train is great," said Carlström. "He has a great attitude and really helps the team towards success. It’s great that he chooses to continue with us."