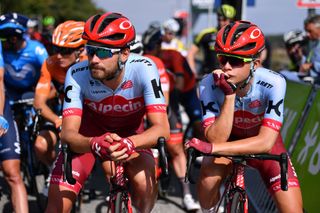 Rick Zabel and Mads Würtz Schmidt have become the first riders to make the move from Katusha-Alpecin to Israel Cycling Academy following the Israeli team's takeover of the folding WorldTour team.

Both riders have spent the past three seasons at Katusha and were under contract for 2020 as the team folded this year. They're the 13th and 14th riders from the 23-man squad to find a team for next year, while Simon Špilak was confirmed to be retiring.

Although more than half the team, including Ilnur Zakarin, Jens Debusschere and Nathan Haas, have found contracts, notable names such as Alex Dowsett and Nils Politt still have yet to announce their future plans.

"We all heard many things about what was going to happen. I kept my fingers crossed for ICA to be the team we would come together with," Würtz Schmidt said in a team press release. "I am happy that at last it's behind us, and we can focus on racing and helping the team achieve its goals.

"The last two years I've noticed ICA in many races. They ride aggressively and always give it a try in the finale for their leader. I kept my fingers crossed that I will land here. My first focus will be the Classics and especially my dream race: Paris-Roubaix."

Both Würtz Schmidt and Zabel rode the Tour de France for the the Swiss team this season, though the German was forced to abandon after stage 10 due to flu. Zabel also won the second race of his career during 2019, taking stage 2 at the Tour de Yorkshire.

"I am so happy, especially after what we went through," Zabel said. "But I am looking forward now. ICA is so special, the only team coming out of Israel. I was so impressed with its success and now that I can be a part of it, and I feel we have a great squad."

With the additions of Zabel and Würtz Schmidt, Israel Cycling Academy now have 20 riders under contract for 2020, while WorldTour rules specify a minimum of 27. When contacted by Cyclingnews about the prospect of more riders making the move from Katusha, ICA media director Tsadok Yechezkeli simply commented, "It's a process. It's moving."

Israel Cycling Academy has already made a couple of big-name signings in Dan Martin and André Greipel, while Rory Sutherland, Hugo Hofstetter, Patrick Schelling and James Piccoli have also signed with the team. Zak Dempster and Rubén Plaza have retired, while Sondre Holst Enger and August Jensen have left for Riwal Readynez.