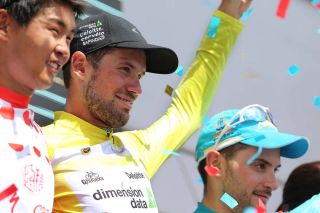 Reinardt Janse Van Rensburg (NTT Pro Cycling) has come to the defence of Rui Costa (UAE Team Emirates) after the former road race world champion was criticized for causing a crash on stage 2 of the Saudi Tour.

The incident, which occurred with around 10km to go, showed Van Rensburg move to his left, before Rui Costa raised an arm and pushed the NTT rider away. That move saw Van Rensburg come crashing down, with several other riders also involved.

He finished the stage, whereupon a number of his teammates shared the video online, seemingly criticising Costa. The Portuguese rider later released a statement to clarify that his hand movement was made in order to protect himself, and that he and Van Rensburg had spoken after the stage.

On Thursday, Van Rensburg added his voice to the story, backing up Rui Costa’s version of events but also stressing that riders within the bunch should always have their hands on their bars.

"Yesterday, I went down in a crash with 12km to go. After a lot of speculation in the media, I decided to allow some time to process the situation before I responded," Van Rensburg wrote on Twitter.

"There was speculation that Rui Costa made me fall, by pushing out his hand and knocking me off balance. To be honest, the fall was initiated from me, as I touched the wheel of my teammate in front of me, causing me to lose balance. I then hit the bike of Marco Marcato.

"At this point Rui, who already had his hand around his face, gave me a push as a reaction to protect himself. It is so that timing of the push at the moment when my front wheel was stuck between Marco’s bike and his foot, which was coming back as he was pedaling.

"In the end, I knew that Rui will have trouble from the Jury, who probably could have expelled him from the race. And while it’s true that his reaction didn’t help me avoid crashing, I felt that, the kind of punishment would be too extreme in this case, as he didn’t purposely endanger me, but it was merely a reaction in my opinion.

"Further, I would like to enforce the mentality that riders should keep their hands on their handlebars and avoid pushing or pulling each other, which might endanger safety. I hope we can move on from this issue now and do what we love… Race our bikes HARD!"

Van Rensburg came back the following day to finish second on stage 3, while Rui Costa was knocked out of the lead and currently sits second overall.

I think using hands is not correct,even having leader jersey! Hope @UCI_cycling will see this video!😡 pic.twitter.com/R1Y4OhoRQsFebruary 5, 2020