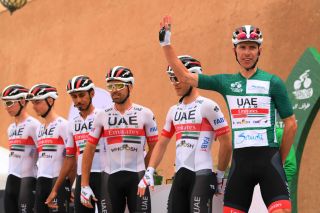 Race leader Rui Costa (UAE Team Emirates) was accused of causing a crash in the closing phases of stage 2 of the Saudi Tour on Wednesday, after appearing to raise his arm and make contact with NTT Pro Cycling's Reinardt Janse Van Rensburg.

The incident occurred with just over 10km to go on the flat stage, and caused a considerable pile-up in the peloton, with Mark Cavendish among those held up.

Video replays showed Janse Van Rensburg move to his left before Costa puts his arm out, makes contact, and the South African falls back to the right, taking down teammate Enrico Gasparotto and a number of others.

"That’s not fair anyway. Hands MUST stay on handlebar," Gasparotto wrote on Twitter alongside a video of the incident.

NTT teammate Roman Kreuziger did the same, writing: "I think using hands is not correct, even having leader's jersey. Hope the UCI will see this video."

I think using hands is not correct,even having leader jersey! Hope @UCI_cycling will see this video!😡 pic.twitter.com/R1Y4OhoRQsFebruary 5, 2020

Rui Costa later took to social media himself to address the controversy, claiming he only raised his arm to protect himself against the threat of Janse Van Rensburg continuing to move across and bumping into him.

"Feeling sad about the crash during the stage of my mate from NTT, which led to the accidental crash of other riders," the former world champion wrote.

"I would like to clarify that it was Van Rensberg himself who accidentally came to my side, and my gesture was to protect myself from crashing.

"After the stage, Van Rensburg came personally to our bus to clarify that this situation happened due to a teammate touching him, and his gesture is really appreciated.

"Everything is clear to both of us and I hope it's also [clear] to everybody. Thanks for all your support."

Both Janse Van Rensburg and Gasparotto managed to finish, though only as the sixth- and fourth-to-last riders, more than five minutes behind Costa and the main field.

"Luckily seems all is OK, pain everywhere as always but nothing broken. Let's see how the night will be," Gasparotto said.

NTT Pro Cycling have not issued an update on Janse Van Rensburg, nor has the rider himself.

Hi fellows 😊 We keep the leader's jersey after today's stage! I thank to all my team mates the extraordinary work to protect me, as well as our team staff for providing us all the conditions we need. We only have to do our best. 💪 Feeling sad about the crash during the stage of the mate from NTT, which led to the accidental crash of other riders. I would like to clarify that it was Van Rensberg who accidentaly came to my side and my gesture was to protect myself from crash. After the stage, Van Rensburg came personally to our bus to clarify that this situation happened due to a team mate touch him and his gesture is really appreciated. 🙏 Everything is clear to both of us and hope it's also to everybody. Thanks for all your support. Big hug 😊 📸 Bettini #UAETeamEmirates #RideTogheter #SaudiTour Rui Costa