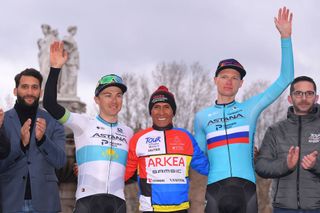 Nairo Quintana took overall victory in the Tour de la Provence in the chilly boulevards of Aix-en-Provence to establish Arkéa-Samsic as a force to be reckoned with this season.

The rejuvenated Colombian has suddenly discovered a new passion for France, just it seems, as the French have for him. "He's one of cycling's greats," his team manager Emmanuel Hubert insisted. "And he's still around 15 per cent short of top form. There's more to come."

Quintana's overall win was based on an unexpectedly solid showing from his new Arkéa-Samsic team who tactically dominated the key moments in Saturday's pivotal stage to Chalet Reynard ski station on Mont Ventoux.

Quintana and Barguil lead Arkéa-Samsic at Volta a Catalunya

In a display of team cohesion that surprised their rivals, Quintana was able to lean not just on co-leaders Nacer Bouhanni and Warren Barguil, but also fellow Colombian, Winner Ancona and veteran, Maxime Bouet, on the brutal climb up Mont Ventoux to Chalet Reynard.

"It's my fourth season in the team and frankly, it's the first time we have ridden so well," said Bouet, who himself spent most of the 2019 season battling injury.

"Winning overall is what everybody wants after so much work," Quintana said. "It's a gift to all the French people who've supported a French team winning in France and hope it's the start of a great era for Arkéa-Samsic."

Quintana's victories in the past week – his first and second of 2020 – bring Arkéa-Samsic's season tally to four, with the other two coming from fellow new signing Nacer Bouhanni, who won stage 1 of the race. With February midway done, the team is already one off their total for the whole of 2019.

The Colombian's campaign will continue next week at the Tour du Var et des Alpes-Martimes, before continuing on to Paris-Nice, the Volta a Catalunya and the Ardennes Classics.