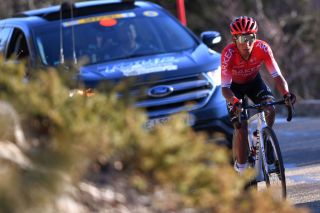 In just two weeks of racing, Arkéa-Samsic, scoffed at before the 2020 season began, have set a blistering pace highlighted by a third stage win for the team, on Mont Ventoux, from Nairo Quintana. The Colombian is now poised to win the Tour de la Provence overall in Aix-en-Provence on Sunday.

Quintana, stage winner in the 2019 Tour de France at Valloire, fuelled memories of past glories at altitude with an irresistible stage victory on the Ventoux.

"I'm working to repay the faith the team has put in me and I hope it will be the first of a long series of successes," the former Giro and Vuelta champion said.

Quintana and Barguil lead Arkéa-Samsic at Volta a Catalunya

Cut adrift further than he might have liked, Groupama-FDJ leader Thibaut Pinot described Quintana as "imperial," a fitting description, given the ease of acceleration demonstrated by Arkea-Samsic's new leader.

"Even in February," Pinot — apparently suffering with stomach pains in the last 48 hours — said, "it's important to be already at 100 per cent if you want to win. But, listen — no excuses."

As he waited to head back down the Ventoux, Pinot's sports director Philippe Maudit acknowledged that the Tour de la Provence was effectively a warm-up race for his team leader.

"I don't want to say that or to be disrespectful to the race organization here but our focus remains July and we are only in February," he said.

"But we still want to win even if we're not at 100 per cent. We are still competitors and any race on the Ventoux is special."

So can Quintana, aided and abetted by a willing Warren Barguil, do some real damage in the mountains during his three-year contract with the Breton team?

It is only February, but so far so good and any win on the Ventoux is a win well worth cherishing. Quintana, at least, now seems rejuvenated by his move and freed of the self-doubt and hesitancy that characterised his final days with Movistar.