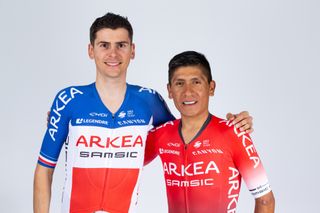 Nairo Quintana and Warren Barguil will race the Volta a Catalunya in March after Arkèa-Samsic received an invite to the 100th edition of the race.

The duo will start the 2020 season together at the Tour de la Provence, and will also compete together at numerous races throughout the season. With their spring programme confirmed, they'll race at Paris-Nice, the Ardennes Classics and the Tour de France, while the Critérium du Dauphiné is another likely addition to the calendar.

"The Volta a Catalunya, which celebrates its centenary this year, presents interesting stages for climbers with finishes at Vallter 2000 and Porte Ainé," said Quintana in a statement issued by the team.

"Thanks to the organisers for trusting my Arkéa-Samsic team by inviting us to the start of their competition."

Quintana has competed at seven editions of the Volta a Catalunya since his first participation in 2011. He won the race in 2016, beating Alberto Contador and Dan Martin, while in 2013 he took his second WorldTour win at the race, taking stage 3 to Vallter 2000. Barguil's best result of his five participations is ninth overall in 2014.

2019 winner Miguel Ángel López (Astana) will defend his title, while Mathieu van der Poel is also likely to race there after the race confirmed Alpecin-Fenix's invite. Egan Bernal (Team Ineos), Alejandro Valverde (Movistar) and Steven Kruijswijk (Jumbo-Visma) are among the other big names likely to take the start on March 23.