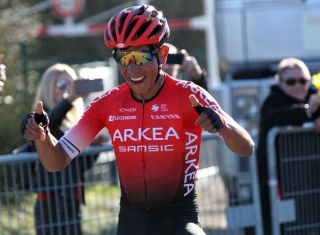 With less than a week to go until the start of Paris-Nice, Nairo Quintana stands out as one of the favourites for 'The Race to the Sun', thanks to his stunning start to the 2020 season in his new Arkéa-Samsic colours.

Ever since he won the Vuelta a Murcia early in March 2012 on his debut with Movistar, Quintana has often proved he is capable of hitting the ground running. He is a former double winner of Tirreno-Adriatico, the Volta a Catalunya and the Vuelta al País Vasco.

Last year, Quintana finished second at Paris-Nice after giving fellow Colombian and overall winner Egan Bernal (Team Ineos) a real run for his money on the last stage. Yet Quintana has never been so successful in February as he has been this year.

While his move to Arkéa-Samsic after leaving Movistar put Quintana under considerable added scrutiny, the Colombian has responded brilliantly. Two stage-race victories and two summit-finish victories at the Tour de la Provence and the Tour des Alpes Maritimes et du Var have silenced any predictions by armchair critics that Quintana would fade away after leaving a WorldTour-level squad for Arkéa-Samsic.

His new outfit's excellent start to the season, with Nacer Bouhanni and Warren Barguil also showing strong form, could well see the French ProTeam become a major contender, at least in the first part of the year, in much bigger races, starting with Paris-Nice.

"We couldn't be more satisfied with how Nairo is racing right now, and not just because of the results," Arkéa-Samsic director Emmanuel Hubert told Cyclingnews.

"People in our team have shown they believe in him, and he has a strong team around him. All that makes him calm, and he's got everything he needs to work and race well. I also think that racing in a French team at these French races is also beneficial, where he's fighting on a home-side team," he said.

"Looking at the debut he's made, it's very clear that Nairo can go for the podium or even the win at Paris-Nice this year."

Asked if he was surprised about how Quintana was performing, Hubert replied: "Honestly? No. When I saw how well he was performing in the Colombian Nationals, even finishing a few seconds ahead of Egan Bernal to take silver, and how hard he's been working on his position on the bike this winter to get more aerodynamic, it's not that unusual."

Barguil and Bouhanni also step up

Quintana's arrival at Arkéa-Samsic has not stopped his teammate, Warren Barguil, formerly the French team's sole stage-racing leader, from having his own chance of success. The reigning French road race national champion took second in the Royal Bernard Drôme Classic on Sunday and will also be in Arkéa-Samsic's line-up for Paris-Nice.

"Warren has had a great winter's training, and he's in better shape this spring than he was last year at this time," Hubert said. "We'll talk on the eve of Paris-Nice and decide what his goals will be."

While Quintana and Barguil will head to the Volta a Catalunya after Paris-Nice, and then maybe the Ardennes Classics, Arkéa-Samsic’s other star signing, Nacer Bouhanni, will target sprint success via a different race programme.

Having claimed one win at the Saudi Tour and another at the Tour de Provence, both in the space of less than three weeks, Bouhanni also seems to be on a solid upward curve. His 15-month lack of success and tension at Cofidis now seem to have been put behind him.

"Over the winter, I said that Bouhanni had to be winning from early on this year if he was going to do well, and that's exactly what's happened. He's now got the confidence back to go for bigger prizes later in the year," observed Hubert.

Bouhanni's next target, albeit dependent on whether the Italian races do go ahead in the current coronavirus climate, will be Tirreno-Adriatico.

As a team manager, Hubert is in an ideal position to see how the arrival of Bouhanni and Quintana, as well as Barguil's ongoing presence in the thick of the race action, has produced a collective shift in the mentality at Arkéa-Samsic.

"We've got three very charismatic leaders and that's brought the whole team up, not just physically but psychologically, to a new level," Hubert said.

"It's so much easier to work for somebody when you know he's going to going for the win. In cycling, it's never just about the leaders, and the rest of the team is responding well. Let's see where that gets us."