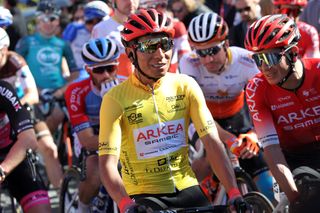 Arkéa-Samsic's Nairo Quintana sewed up his new French ProTeam's sixth victory of the season at the Tour des Alpes-Maritimes et du Var on Sunday, praising his teammates and the squad's staff and fans after taking his second overall stage-race victory in a row, having also won last week's Tour de la Provence.

While the French squad is still operating at ProTeam-level – the new name for the Pro Continental teams – Arkéa signed a number of star names in the off-season, putting them on a par with many WorldTour teams in all but name.

As well as bringing in Quintana, Arkéa have taken on the Colombian's compatriot and former Movistar teammate Winner Anacona, brought back British sprinter and former team member Dan McLay from EF Pro Cycling, and secured the signature of Nacer Bouhanni from Cofidis, with the French sprinter already winning stages at the Tour de la Provence and the Saudi Tour this season.

Quintana won stage 2 of the three-day Tour des Alpes Maritimes et du Var on the climb of the Col d'Eze on Saturday to take the race lead from the winner of the opening stage, Anthony Perez (Cofidis). The 30-year-old then defended it from AG2R La Mondiale's Romain Bardet and Trek-Segafredo's Richie Porte on the third and final stage on Sunday, from La Londe to Mont Faron, which was won by Porte's teammate Julian Bernard.

"I'm full of joy and emotion here this evening on Mont Faron because, as a team, we've really shown what great shape we're in," Quintana said in a team press release.

"This overall victory at the Tour des Alpes-Maritimes et du Var is another success for the Arkéa-Samsic team, and for our partners who support us," he continued. "It's also another great victory for our fans, as well as being the start of a new story we're writing with the team.

"The whole team worked really hard for me today, from the start to the end of the stage, and that commitment was reflected by this win, which belongs to all my teammates," said Quintana. "We'll take advantage of these moments that come our way; you have to, because in sport things don't always go the way you want them to. But this victory is a great achievement for everyone on the team."