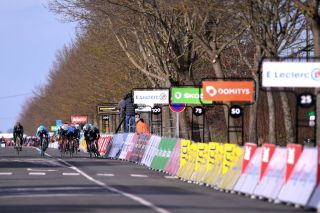 NTT’s Giacomo Nizzolo sprints to victory on stage 2 of the 2020 Paris-Nice, at a stage finish in Chalette-sur-Loing devoid of spectators, who were kept at a distance due to fears about the coronavirus spread (Image credit: Getty Images Sport)

Two of the world's leading experts in global health and contagious diseases have given a gloomy prognosis for both the Giro d'Italia and the Tour de France, as the spread of the coronavirus continues to cut a swathe through the world's sporting calendar.

The Giro d'Italia is due to start in Hungary on May 9 but is looking increasingly unlikely given the now nationwide restrictions of movement applied across Italy, and June's Tour de France is potentially also at risk as positive cases continue to increase across Europe.

Devi Sridhar, Professor of Global Public Health at the University of Edinburgh, told Cyclingnews that there was no evidence to "suggest that coronavirus transmission will be affected by better weather" and added that "postponing [sporting events] makes the most sense until we know exactly where the virus is and isn't".

Although French race organiser ASO have introduced new measures to separate athletes from spectators at the start and finishes during this week's Paris-Nice, in line with the French government's new edict limiting public gatherings to 1,000 people, these measures would be almost impossible to maintain in a three-week Grand Tour, attracting huge crowds to the roadside. The Italian decree makes it clear the race organisers are responsible for the application of any rules of crowd sizes and distances between spectator.

"Realistically we will only see new cases coming down when we have been able to contain transmission of the virus from person to person," Sridhar said.

"Other sporting events are going ahead without having people watching but cycling seems to be an 'open attendance' sport, so it's harder to manage in the same way."

Looking ahead to both the Giro and the Tour, both of which have a race convoy well in excess of 1,000 people, Sridhar said: "The key question now is whether there is community spread in areas where the race will be.

"If there is, or clusters have been identified, then postponing makes the most sense until we know exactly where the virus is or isn't."

Meanwhile, Adam Kucharski, a mathematician at the London School of Hygiene and Tropical Medicine, and author of The Rules of Contagion, told the New York Times that "some situations are more likely to spread infection than others."

"We've found that, for things like Covid-19, it's close-knit interactions that seem to be most important," Kucharski said. "What we need to think about is not just how much transmission is happening, but where is that transmission happening."

Both Sridhar and Kucharski advocate an immediate limiting of risky interactions that might further spread the disease.

"Think how to reduce those risky situations as much as possible," Kucharski said.

"We have different scenarios," Sridhar said. "Best case, other countries can contain the virus in a similar way and bring down new infections. Worst case, it continues spreading in the next few weeks to cover a large percentage of the population."

So, what public health parameters would need to be satisfied for either the Giro or the Tour to go ahead?

"Ideally, we would be seeing decreases in the daily number of new cases, strategies to keep people at distance from one another [by avoiding large crowds/social gatherings], and the sense that we're past the peak of the outbreak," Sridhar said, but added, "This is hard to predict right now as numbers are still increasing in Europe."