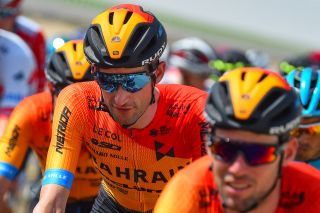 Wout Poels was full of hope when he started stage 3 of the UAE Tour, but his dreams of a top general classification place evaporated in the scorching heat at Jebel Hafeet, with the Bahrain McLaren leader losing close to four minutes on stage winner and new race leader Adam Yates (Mitchelton-Scott).

Poels was one of the first major casualties when the race hit the final 10km climb and was duly dropped with 7.3km to go. He rode at his own pace to the summit but fell well short of his own expectations.

He came into the UAE Tour after an impressive sixth place at Valenciana earlier this month but gave a brutally truthful description of his performance in the Middle East.

Wout Poels: I was getting a bit stuck at Team Ineos

"It was pretty shit. Straight away on the climb we went full gas and I just didn't have the legs. End of story. Maybe it was the heat, maybe, but it just wasn't my day,” he told Cyclingnews.

The race returns to the same climb on Thursday's stage 5. Poels – if he can recover and find some level of form – might find himself given freedom from the front of the bunch.

"I felt pretty good coming into the race but maybe I can try again in a few days," he said before wheeling off towards the showers.

Outside the Bahrain McLaren team bus, Rod Ellingworth sympathised with his team leader.

"It's disappointing for Wout. He's been training for this for a while," Ellingworth told Cyclingnews.

"He'll be more disappointed than anyone else. He knows how to ride on this climb. He's done it before and he's performed on it. The thing is, form-wise, we know he was pretty good. It's not worked for him this time and it will be quite interesting to find out."

With their GC chances all but over, the team will now focus entirely on stage wins. With Mark Cavendish in their ranks, they can conceivably look towards the sprint stages, while their climbers will be let off the leash at Jebel Hafeet on Thursday.

Cavendish is searching for his first win in Bahrain McLaren colours since officially joining the team at the start of the year.

"We'll have a look later and see what the score is and what happened. It's just one of those days," Ellingsworth said. "Hopefully we'll see Cav performing or at least having a go. He's good, in general. I think he's still trying to make that little breakthrough, and he's trying. Nothing has changed and we're still backing him and behind him."