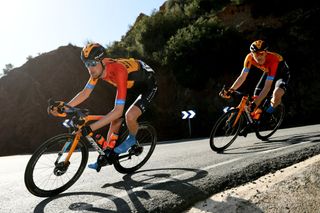 When Bahrain McLaren climber Wout Poels discusses his former team, Team Ineos, he is at pains to emphasise that he had "no regrets" about the five years he spent with the British WorldTour team. He is also equally clear that at this point in his career, it was time to move on to a new team.

Back in the day, Poels was once touted as a possible Grand Tour contender. But that project seemed to have ground to a halt at Team Ineos. He told Cyclingnews that his role as a top wingman in the mountains for Chris Froome, Geraint Thomas, et al, found him hitting a glass ceiling when it came to looking to explore his upper limits.

Team Ineos' multiplicity of GC leaders, including three Tour de France winners, could well have had a lot to do with that. Poels' already limited opportunities for GC challenges arguably took another hit this winter, with the signing of 2019 Giro d'Italia champion Richard Carapaz.

"I really enjoyed my time at Ineos, so I don't regret it. But now was the time I could change teams, so I had to go for it."

His role at Bahrain McLaren is yet to be fully established, although he says he will likely only race the Tour de France. "[Mikel] Landa will be the leader, but I'll probably have a free role. We'll see how it goes in the next few months and take it from there."

Landa is a former teammate of Poels at Team Sky, prior the Basque's spell with Movistar.

While that freedom of manouvre, if finally granted, would constitute a big change for the Dutch climber after so many years of limited options, so does moving to a different squad. Poels told Cyclingnews that his race program will stay the same.

"I'll do the UAE Tour, but beyond that I'll be doing the Ardennes Classics, probably the Dauphiné. No changes there.

"I had a good winter and also a new team, that all went well. Of course, you can get a bit nervous, coming to a new team and new people, specially after five years with the same squad. But it's a really nice environment here."

A former winner of Valencia a few years back, this time round Poels is taking things a little more calmly. On the first summit finish on Thursday, he finished 18th, saying "it wasn't too bad, I just lost a few seconds in the last 800 metres.

"It's the first race of the year, so Saturday's stage is going to be hard. But I feel good in general."

Poels refuses to give himself specific goals yet for 2020, but he recognises that this is a key year for him, all the same.  Or as he puts it, "It's a fresh start, a little bit of a new role and I just want to get some good results, take every opportunity I can and go for it." As simple and as complicated as that.