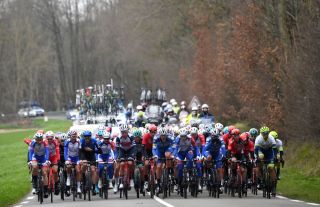 As if eager to make up for the loss of Tirreno-Adriatico, Paris-Nice delivered a breathlessly dramatic opening day of racing around Plaisir, causing significant developments with just 150km on the clock.

Romain Bardet (AG2R La Mondiale), Richie Porte (Trek-Segafredo), Xandro Meurissee (Circus-Wanty Gobert), and Guillaume Martin (Cofidis) can all wave goodbye to any pre-race hopes of claiming the overall title in Nice next Sunday. Warren Barguil (Arkea-Samsic) won't even make it to Nice, after being disqualified for drafting.

Meanwhile, stage winner Max Schachmann (Bora-Hansgrohe) has put himself in a strong position, 25 seconds clear of most of the field. Dylan Teuns (Bahrain McLaren), Tiesj Benoot (Sunweb) and Julian Alaphilippe (Deceueninck-QuickStep) – the other members of the quartet that contested the finish – can also count on a slight head start over most of the GC contenders.

Bardet was perhaps most high-profile casualty among the overall hopefuls. The Frenchman wasn't supposed to be here – the postponed Tirreno-Adriatico was on his original program – but he was still supposed to be competitive this week as he builds towards the Giro d'Italia.

He crashed with Barguil at a roundabout with 61km to go – just as the race was splitting into echelons again in the crosswinds. He was able to get back into the race but spent the rest of his day chasing. Almost the whole team – barring Oliver Naesen – were posted back to help the chase, but things never relented at the front of affairs and he was stuck in the third main group, crossing the line 2:42 down on the winner.

Team manager Vincent Lavenu refused to explicitly write off Bardet's overall chances, but did hint he'd have freedom to hunt stages in the mountains, which is effectively the same thing.

It was a bruising day for AG2R in general as Pierre Latour, the team's leader for the Tour de France and their Plan-B here, finished more than nine minutes down.

While Cofidis got a man into the key echelon that formed shortly after Bardet's crash, it wasn't Guillaume Martin. Nor was the French climber in the second split. He crossed the line with Bardet, and Cofidis' hopes for one of their most important outings of the season have been severely restricted.

Richie Porte, who won Paris-Nice in 2013 and 2015, was also in that group. The Australian has said he's here to target stage wins and support Giro d'Italia hopeful Vincenzo Nibali, who finished safely in the main pack, so it's far from the end of the world for Trek.

Xandro Meurisse was a dark horse, having won the recent Vuelta a Murcia, but finished in a small group 3:16 down. Meanwhile, Ben O'Connor, who'd seemingly put a miserable 2019 behind him with a stage win at the Etoile de Besseges, finished in the last group nearly 15 minutes down.

While there are four riders out in front and a host of others down and out, there are a number of riders who hit level par. Nairo Quintana (Arkea-Samsic), Thibaut Pinot (Groupama-FDJ), Vincenzo Nibali (Trek-Segafredo), Sergio Higuita (EF Pro Cycling) and Pello Bilbao (Bahrain McLaren) all finished safely in what turned out to be a 30-rider main peloton.

Bilbao, who picked up a bonus second at the second intermediate sprint, sits fifth overall, 24 seconds behind Schachmann. The others are at 25 seconds, and are 23 down on Benoot, 21 down on Teuns, and 18 down on Alaphilippe.

With the stage 4 time trial to come, followed by the summit finish at La Colmiane on the penultimate day and the finely poised medium-mountain finale in Nice, there’s plenty of room to make up for lost time.

Quintana, Pinot, Nibali, Higuita, and Bilbao are all stronger climbers than the top four of Schachmann, Teuns, Benoot, and Alaphilippe, who are all more puncheur-all-rounders. The question is whether there’s enough climbing left in this race.

The only truly mountainous stage comes on the penultimate day with three climbs on the way to the first-category La Colmiane, which measures 16.3km long at 6.3 per cent. The last time it featured in Paris-Nice, in 2018, Simon Yates was victorious, but a certain Dylan Teuns was only eight seconds back in second place.

Given his form, it’s hard to look past Quintana for victory on La Colmiane, but his deficit to the top four is only likely to increase in the 15.1km time trial in Alaphilippe’s hometown. He’ll need a repeat of the virtuoso displays on Mont Ventoux and Col d’Eze that have led him to victories at the Tour de la Provence and Tour du Var already this season.

The final stage takes in four climbs in the Nice hinterland and is designed to produce a finely balanced finale once again after the race was decided by fewer than five seconds between 2016 and 2018. For that reason, it was no surprise to see Alaphilippe and Benoot go after bonus seconds on stage 1 here, before they went all-in on a 30-kilometre break.

This is a race that will surely come down to fine margins once again, but it’s also worth bearing in mind that it’s a race that might not even finish. Given the number of coronavirus cases in France has surpassed 1,000, and given Nice’s proximity to northern Italy – the worst affected country outside Asia – it’s far from beyond the realms of possibility that the race is halted in its tracks.

Adam Yates had no idea he’d be declared the winner of the UAE Tour two days early, but the riders here will be aware they need to fight for every second before the race even reaches Nice.

In that respect, there’s surely more excitement around the corner.