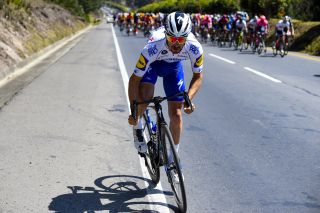 Julian Alaphilippe on the attack at the Tour Colombia (Image credit: Bettini Photo)

The spread of the Covid-19 coronavirus may have claimed Tirreno-Adriatico, but Paris-Nice, the other key week-long WorldTour stage race in March, is all set to go ahead on Sunday, albeit with plenty of hygeine-related caution.

While six WorldTour teams - Ineos, Jumbo-Visma, Mitchelton-Scott, Movistar, CCC, Astana - have withdrawn from the so-called 'Race to the Sun', a number of riders have added it to their schedules due to the postponement of racing in Italy this month.

Given the drop in teams, squad sizes have been increased from seven to eight riders. With GC riders who were targeting Tirreno and Classics specialists building up to the spring now lumped in with those who were targeting Paris-Nice all along, it's an eclectic start line.

We've picked out seven riders who are particularly worth keeping an eye on.

The Frenchman pottered around South America at the start of the year without a care in the world and, while his results in January and February will not define his spring, let alone his season, we are now at the point at which results start to matter.

The Paris-Nice route is well suited to the 27-year-old, with a short and punchy time trial near his home and just enough mountains to test but not break his resolve. Perhaps more importantly, as cycling enters a phase of unpredictability owing to the coronavirus, it’s the riders who can improvise at the drop of a hat that might best deal with such challenging times. Based on intuition and aggression, it's the hallmark of Alaphilippe’s racing style.

Despite a flurry of WorldTour teams missing from the start list, Paris-Nice still holds a stacked deck of GC contenders. The most in-form of them is arguably Nairo Quintana, who has two wins from two at the Tour de La Provence and the Tour des Alpes Maritimes et du Var.

As he succeeds with every challenge set in front of him, the bar rises, and this time the rejuvenated Colombian starts his first stage race against a deeper WorldTour field. The course includes a time trial, and his team will have to work their socks off in order to keep him in contention, but the mountains offer just enough terrain on which Quintana can shine.

Aside from Richie Porte, he probably has the best week-long palmarès in the peloton but, as we go deeper into the season, we’ll start to see if Quintana really is back to his very best.

Even though Mikel Landa is missing in action with a rib injury, the Bahrain McLaren squad head towards France with a deep pool of talent. They have Damiano Caruso, Pello Bilbao, and Dylan Teuns for the GC, but it’s Cortina who carries the most interest in the Cyclingnews offices.

The Spaniard is just coming back from a bought of illness and missed the Opening Weekend but, as a developing talent, he’s right up there. Not as quick as the pure sprinters, Cortina offers something different and when the bunch splits, and there’s a scramble for position, expect the Spanish rider to be glued to Heinrich Haussler’s wheel as the reduced peloton begins to open up for the sprint.

The Belgian team have come to Paris-Nice to sprint and compete in the crosswinds but they also arrive in France with Xandro Meurisse in their ranks. The 28-year-old was often overshadowed by his former teammate Guillaume Martin until the Frenchman departed for Cofidis but, since that move, Meurisse has taken his opportunity with both hands.

At the Etoile de Bessèges he was 12th but he followed that with a stage win and the overall title at the Vuelta a Murcia. A solid 18th followed at Algarve and while he may not be the most glamorous of stars on the start list, this week, Meurisse will still be worth keeping an eye on as he builds up towards the Tour de France.

As one might expect with the cancellation of Tirrreno, the sprint field at Paris-Nice is brimming with names as Pascal Ackermann, Sam Bennett and Caleb Ewan all arrive from the UAE Tour and a host of other names join the party after their invites to Italy have been torn up.

One such rider is Viviani, who enters the stage with the most intriguing subplot around him. While a chunk of his lead-out still remains quarantined in the Middle East, the Italian has been switched from Tirreno-Adriatico to Paris-Nice at the drop of a hat. That might not seem like a logistical nightmare but from a training and psychological point of view, the smallest changes to an elite athlete’s programme can have much larger ramifications.

Then you bring in the fact that Viviani is still searching for his first win in Cofidis colours and you can start to see the significance of this race. Viviani already has plenty to fall back on if he doesn’t win during the week but, at some point, he has to deliver.

EF Pro Cycling probably don’t get enough credit for the manner in which they’ve steadily developed Higuita’s career, while at the same time managed expectations around him. While plenty of teams have succumbed to throwing young riders in at the deep end – some more successfully than others – the American squad have taken their time with the talented Colombian.

An impressive win at the Tour Colombia in February illustrates that the 22-year-old has started the season in fine fettle but racing in Paris-Nice conditions will provide an entirely different test. There is plenty of firepower and support for the flat stages, with Tom Scully and several Classics specialists, while Tejay Van Garderen, Michael Woods and the ever-dependable Tanel Kangert will offer vital cover in the mountains.

The Tour Down Under break in which Peter Sagan linked up with Cadel Evans, Alejandro Valverde and Luis Leon Sanchez back in 2010 has gone down in folklore as a seminal moment in the Slovak’s career but, in truth, it was his performance here a few months later that truly put the young rider on the world stage, with two stage wins in Aurillac and Aix-en-Provence.

Since then Sagan has only raced Paris-Nice once, with his personal preference to use Tirreno as his week-long warm up before the Classics. However, with coronavirus sweeping through Europe, needs must and Sagan finds himself in France as he ramps up his spring prep.

As ever, success in this race for Sagan will be determined solely by his motivation. While there’s understandable hype around the new generation, Sagan is still a formidable force and the opening stages looked ideal for him. Ackermann might be the desired favourite for the sprints but, with cobbles and crosswinds, expect Sagan to be in mix when it really matters.