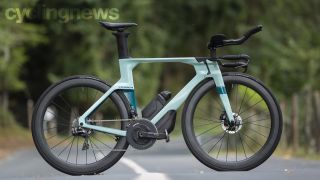 It's easy to fall prey to the cycling industry's marketing hype machine but Orbea genuinely looks like its pulled out all the stops with its latest Ordu time trial bike. The chief focus for the Spanish company was finding a way to balance the three most important design principles - aerodynamics, weight and stiffness. Usually, when focussing on improving one of these attributes the others can become compromised but Orbea reckons its struck a balance with the new Ordu, a bike it claims is the fastest it's built.

When it came to aerodynamics, the designers looked at ways to ensure total integration as a system culling areas of surplus by shaping the frame to function seamlessly with the brakes, wheels, bars, seat post, hydration and storage systems. Through these measures, Orbea was able to reduce the total drag by 11.5%, which yields a 41-second improvement over 180km at an average of 43 km/h.

Aesthetically, the Ordu looks beefier and more aggressive than the outgoing model. The tube shaping - while quite spectacular - is every bit as functional as it is intriguing with chamfered cutouts running throughout the frame architecture - measures which double up to reduce both weight and drag. As a result, Orbea was able to keep weight to a minimum across the board with the frame (1,130g), fork (440g), seat post (180g) and base bar (245g) all playing a role in the bike's sub-8kg weight.

Handling was another area that received an overhaul. Orbea lengthened the reach to increase stability when sitting in an aero position while a 72-degree headtube angle and lower bottom bracket were implemented to improve response, control and balance in racing conditions.

The big talking point with the new Orbea Ordu however, comes in the form of its adjustability and ergonomical properties. The bike was designed to accommodate any type of rider by way of the generous adjustment points and angles around the stack, reach, armrests, handlebar assembly and seat post. In terms of sizing, the Ordu is available in four options (XS, S-M, M-L, XL). The Ordu is available in two standard colourways: 'Ice Green Ocean' and 'Speed Silver Brilliant Rouge' and can also be customised with Orbea's MyO platform, which lets customers tailor the paint, graphic and component options.

Three spec levels are available including a frameset only OMX option. The range is spearheaded by the Orbea Ordu M10i Ltd which is built around a Shimano Dura-Ace Di2 hydraulic groupset and Rotor ALDHU R 52/32T crankset. The balance of the build comprises Vision 55 SC Disc Carbon TLR CL wheels, Vision Metron TFA Carbon Aero Clip-on and a Fizik Argo Vento R5 saddle with Orbea's in-house accessories rounding off the seat post, bars and storage. The Orbea Ordu M10i Ltd will retail for £7,999 / €8,999 / $8,999

The entry-level Ordu M20 Ltd is the only mechanical setup in the range. While it benefits from Shimano's venerable Ultegra R8000 groupset and slightly less premium Rotor Vegast crankset, everything else remains on par with its two stablemates. Pricing is a fair bit cheaper at £4,199 / €4,699 / $4,999.

The Orbea Ordu will double up as weapon for both the serious triathlete and pro cyclist. By merely removing the downtube storage system it becomes instantly UCI legal meaning it can be used without issue during WorldTour events and the like.