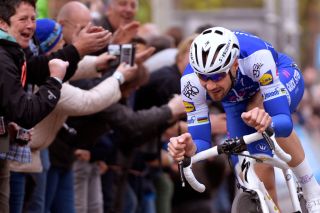 Tom Boonen races for one last time near his home in Zilvermeer, Belgium, in April 2017, having ridden his last professional race at that year's Paris-Roubaix. The Belgian appears to have given up on any prospect of a comeback, despite admitting that he had seriously considered it (Image credit: Getty Images Sport)

Tom Boonen has come to the defence of Remco Evenepoel amid a UCI investigation into the object removed from his pocket at Il Lombardia.

Evenepoel was lying stricken after falling off a bridge on the descent of the Sormano when Deceuninck-QuickStep director Davide Bramati removed a small white object from the back of his jersey and put it into his own pocket.

Various theories have circled since video evidence emerged, with UCI president David Lappartient confirming that the use of an illegal data transmission device was one of the possibilities under investigation.

Deceuninck-QuickStep have since released a statement saying it was a 'finish bottle' containing nutrition products, and Boonen, who rode for the team for 15 years - many of them under Bramati - backed up that explanation.

"I first heard of it on Saturday, on my brother's birthday. I have not seen the video. My dad brought it up. Do you now have to justify every bottle you have in your pockets?" Boonen asked in a column for Het Laatste Niuews.

"Everyone knows that riders eat and drink and that sometimes supplements are taken. I'm talking about energy bottles, concentrated Red Bull or something. That's nothing.

Evenepoel on 'pocket investigation': I've been crying in my father's arms

"Let Remco give the answer himself, then everything will be solved. No wonder drugs will fall out of that back pocket. Probably every rider in the Tour has a bottle with concentrated sugars or something similar in his back pocket. I don't understand the commotion."

Boonen also commented on suggestions the item could have contained banned substances, such as Tramadol.

"Tramadol? A pain reliever that also causes falls? I can now give you on a piece of paper, signed by me, that they do not use Tramadol in Patrick Lefevere's team. Not as long as I was a rider there," Boonen said.

Although he did not specifically address what the item was, Evenepoel has spoken about the incident, thanking fellow rider Serge Pauwels for explaining that rear pockets should always be emptied before a rider is placed on a stretcher.

"I'm going to be honest. This morning I've been crying in my hospital bed in my father's arms. That is how shit I felt," Evenepoel said. "I was fighting for my life at that moment. And my team just did the best for me."

Boonen, a four-time Paris-Roubaix winner and three-time Tour of Flanders champion – who retired after the 2017 edition of Roubaix – has also confirmed that he was seriously considering a racing return next season, until the coronavirus pandemic put paid to such plans.

"It's got me thinking: if she can make a comeback, why couldn't I? But then I immediately think, 'Why would I?'" he admitted.

On Monday, Boonen appeared on Tour de France show Vive le Vélo on Flemish TV and, according to Het Nieuwsblad, admitted that "concrete plans" had started to be developed for him to make a comeback at next year's Paris-Roubaix.

"At the time [in March], I didn't really know if I could, or even wanted to, make a comeback," he said. "But then some people said, 'Well, if you're going to start training again, why not make a comeback and race for a year?'

"All at once, the ball was rolling, there were some concrete plans and I was in talks with a few people," Boonen admitted.

"It wasn't so much the racing that I was interested in – it was that I wondered how difficult he would be to actually get back to that level.

"But then the coronavirus pandemic came, and everything came to a standstill," he said.

"I actually ride very little now, but I do still keep fit. I had to 'reset' for a few years, completely away from the sport, but then you get a fresher perspective on it. So I'd been wondering what might have been possible, and it would probably have been at next year's Roubaix, if it had happened."

Asked whether he'd instead consider being a team sports director, Boonen wasn't so sure.

Last October, Boonen narrowly escaped injury following a motor-racing crash in the final of the Belcar Endurance Championship at the TT Circuit Assen in the Netherlands.

The 40-year-old began his motor-racing career soon after retirement in 2017, and won his first race just the day before his crash.