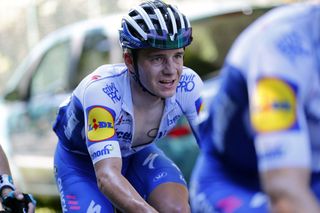 Deceuninck-QuickStep’s Remco Evenepoel was riding strongly and was one of the favourites for victory at the 2020 Il Lombardia before his race was ended by a serious crash (Image credit: Bettini Photo)

Remco Evenepoel says that he's "been crying in my father's arms" in reaction to the news that the UCI has opened an investigation into what the Belgian's Deceuninck-QuickStep sports director, Davide Bramati, removed from the rider's back pocket following his season-ending crash at Il Lombardia two weeks ago.

Video footage of the incident shows Bramati reaching into Evenepoel's jersey back pocket and taking out what looks like a small white bottle, which was later explained by team boss Patrick Lefevere as being a 'finish bottle', which he said riders sometimes have containing some energy drink or Coke to drink in the finale of a race.

CCC Team rider Serge Pauwels appeared on Tour de France show Vive le Vélo on Flemish TV station Eén on Saturday, and, according to Het Nieuwsblad, said that the incident had become a "storm in a teacup".

"If you put someone on a stretcher, it just makes sense that those pockets would be emptied," Pauwels said of the crash that left 20-year-old Evenepoel with a fractured pelvis.

"Thanks a lot, Serge Pauwels, for explaining the situation I was in," Evenepoel wrote on Twitter on Saturday evening. "I'm going to be honest. This morning I've been crying in my hospital bed in my father's arms. That is how shit I felt. I was fighting for my life at that moment. And my team just did the best for me."

While Lefevere and the team have insisted that the item removed from Evenepoel's pocket was a bottle of drink, the UCI are investigating whether it could have been some kind of data device to illegally transmit strategically important power data to the team car to gain a sporting advantage.

On Friday, UCI president David Lappartient questioned a statement Bramati had given shortly after the crash, in which the Italian mentioned knowing beforehand that Evenepoel had crashed as his "data had stopped".

"The directeur sportif said he thought Evenepoel had fallen as no more data was being sent," Lappartient said. "What data are we talking about, then? After all, it is forbidden to send certain data. So, we are also looking at that point. If it is only about geographical position then it's something else, but sharing other data is not allowed."

The subsequent Deceuninck-QuickStep statement read: "As has already been stated publicly, the item that was captured being removed from Remco's pockets was a small bottle containing nutrition products and was removed in order to help him to be placed more comfortably by medical staff on the stretcher."

On Saturday, a statement from the UCI to Cyclingnews read: "Based on the images circulating on the internet, CADF heard from representatives of the team. The investigation is underway and the UCI will not comment further at this stage."

Thanks a lot @sergepauwels for explaining the situation I was in. I’m going to be honest. This morning I’ve been crying in my hospitalbed in the arms of my father. That is how SHIT I felt. I was fighting for my life at that moment. And my team just did the best for me! 🐺💙August 29, 2020