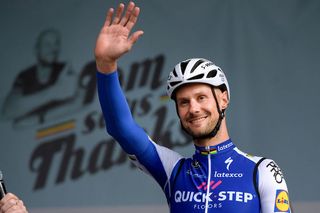 Tom Boonen waves to his fans at his 'farewell race' in April 2017 (Image credit: Getty Images)

Four-time Paris-Roubaix winner and three-time Tour of Flanders champion Tom Boonen narrowly escaped injury following a motor-racing crash in the final of the Belcar Endurance Championship at the TT Circuit Assen in the Netherlands on Sunday.

Boonen: Attention on Evenepoel is not healthy

Boonen retired from professional cycling in April 2017, the day after riding to 13th place at Paris-Roubaix, and made his motor-racing debut in July of that year.

He won his first race just the day before his crash, in the CN Prototype Division of the Supercar Benelux Challenge, on the same TT Circuit Assen on Saturday, and posted a picture of himself celebrating in his racing kit on Instagram. However, during the Belcar race on Saturday, Boonen told Belgian TV channel VTM how German driver Kenneth Heyer's Mercedes AMG-GT landed on his Norma M20FC just centimetres away from his head.

"I passed Kenneth and he came in too early and hit me," Boonen told VTM, according to hln.be. "The result was one big crash that could have ended very badly.

"I don't think he saw me. The car literally landed on my car, 10 centimetres from my head. I was really very lucky," he said of the crash, which happened when both cars were going at over 200kph, according to Het Laatste Nieuws.