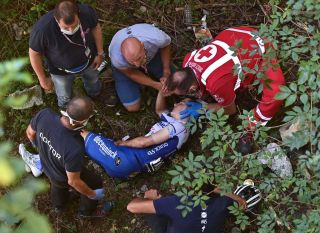 Deceuninck-QuickStep have confirmed that the Cycling Anti-Doping Foundation (CADF) has opened an investigation into the item that directeur sportif Davide Bramati removed from Remco Evenepoel's pocket after his crash at Il Lombardia. The team has claimed that Bramati removed "a small bottle containing nutrition products".

A video emerged this week of Bramati taking a white object from Evenepoel's pocket as he lay in the ravine after his crash. Some reports suggested it could be a data device to illegally transmit strategically important power data to the team car to gain a sporting advantage.

UCI president David Lappartient confirmed the investigation on Friday and questioned a statement Bramati gave shortly after the crash, in which the Italian mentioned knowing beforehand that Evenepoel had crashed as his "data had stopped."

"The directeur sportif said he thought Evenepoel had fallen as no more data was being sent," said Lappartient. "What data are we talking about then? After all, it is forbidden to send certain data. So, we are also looking at that point. If it is only about geographical position then it's something else, but sharing other data is not allowed."

CPA fires back at riders after criticism following Dauphiné crash

UCI regulations allow the use of onboard technology but prohibit the transmission of data to third parties unless UCI approval is given, as per Velon or other data collection devices.

Deceuninck-QuickStep insisted the white object was a small bottle and not a data device.

“As has already been stated publicly, the item that was captured being removed from Remco’s pockets was a small bottle containing nutrition products and was removed in order to help him to be placed more comfortably by medical staff on the stretcher,” a statement from the team said.

"We have reiterated this to CADF and we will continue to cooperate with their enquiries if needed.

"With regards to the transmission of data, we would also like to clarify that data such as live location is transmitted by the Velon device that was installed on bikes during Il Lombardia by Velon in partnership with the race organiser. The devices allow everyone, including the fans, to track and see rider data live in the race.

"We are confident that this will put an end to any further speculation surrounding the incident."

Deceuninck-QuickStep boss Patrick Lefevere has hit back against the UCI, suggesting the investigation has ulterior motives. In a typically combative mood, Lefevere took to Twitter on Friday night to rail against both the UCI and the "so-called independent body", the CADF.

He also writes a weekly op-ed column for Belgian newspaper Het Nieuwsblad, which this week focused on the investigation.

"Apparently, these images suffice for an investigation by an official body," Lefevere said, before going on to rail against Antoine Vayer – the ex-Festina coach who brought the video to light on Twitter.

"He posts the most ridiculous videos, which are deliberately cut as suggestively as possible.

"What happened? Bramati descended into the ravine after Remco's fall and removed all hard objects to save him from additional injury – his helmet, radio and also a bidon [water bottle] – in this case one a few centimetres in size.

"The only thing that can be seen in the images is that bidon, because that of course appeals most to the imagination."

In live images from the race, Evenepoel can be seen taking what looks to be a white bidon from a team soigneur atop the Sormano at 50.2km to go before putting it in his bottle cage.

Two kilometres later, he takes a drink while descending before reaching back to put the item in a jersey pocket just moments before crashing out of the race.

Lefevere says that the bidon is one often used in race finales, and contained nothing more than an energy drink or caffeine.

"Riders often use a bidon in the finals. That so-called 'final bottle' has meanwhile acquired a very bad reputation as a kind of sorcery, when the reality is that bidons in finals are simply more convenient and less sticky than gels.

"What's in such a bidon? Coke, Red Bull or a bit of caffeine. Nothing that is forbidden. There are certainly no painkillers because our team doesn't do that crap. We have never used Tramadol. The mysticism around the bidon is mostly a placebo effect."

Following on from his earlier Tweets, Lefevere continued to criticise the actions of the UCI, suggesting that the investigation is a retaliation in the ongoing fight over rider safety, which came to a head after a string of crashes over the past month, two of which involved Deceuninck-QuickStep riders.

"The most cynical reading of the facts is that I ventured onto the barricades again this week," Lefevere said. "Together with Richard Plugge and a number of other team bosses, we're working on an initiative to make cycling safer.

"We want to outsource this to an external organisation, very much against the wishes of the UCI, who see it as a vote of no confidence. It's unjustified because our concerns must be theirs, too – cycling must become safer.

"The confluence of circumstances is clear – by coming out now with news of the investigation, I'm paying the bill for my big mouth in the safety debate. It's scandalous, because it proves that the CADF is not independent, but an instrument that serves the agenda of the UCI, while cycling teams still co-finance the CADF.

"The decision is painfully clear: poor, poor cycling. Distressing. I don't have another word for this story."

On Saturday, the UCI stated: "Based on the images circulating on the internet, CADF heard from representatives of the team. The investigation is underway and the UCI will not comment further at this stage."