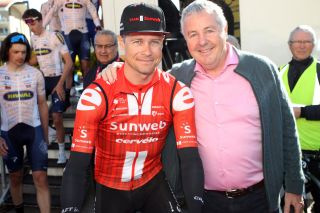 Team Sunweb's Nicolas Roche has spoken about how he got through eight weeks of confinement, alone, in his apartment in Monaco. With the company of his home trainer and Zwift, and a little help from his friends on social media, the time passed by, and now the veteran Irish rider is free to train outside once more.

"When I woke up, I was feeling motivated," Roche told L'Equipe on Tuesday, regarding Monaco's coronavirus-isolation measures having been relaxed the previous week, allowing pro riders to train outside for the first time since mid-March. "But then I saw what the weather was like, and so I decided to see my family – who I hadn't seen in two months – instead. I managed without going out on my bike for 55 days; 56 days wouldn't make much difference."

On Tuesday, he tweeted: "Feels so good to be able to go out on the road again!" The message was accompanied by a picture that looked as though he'd broken out of the principality of Monaco and out onto the surrounding French roads. Riders based in France were only allowed to ride outside from Monday, and it appeared that Roche had in fact waited until this week to venture outside and into France.

"I'm surprised I got through it without jumping off the balcony," the 35-year-old joked to L'Equipe of the time he spent on his own at his flat. "At first I was a little concerned, as I've never been alone for any real length of time before. But along with [Sunweb teammate] Michael Matthews, my brother and a friend, we created a WhatsApp group, and we downloaded Zoom, and every morning – at precisely 10:30 – we did an indoor ride together.

"It was nothing like riding outdoors together; it was the social side that was important," continued Roche. "We attacked each other on the climbs, got annoyed with each other, laughed together… It was fun, but that was vital for me, and social media has kept me company.

"I may be the only rider to admit it," he added, "especially as I didn't gain a kilo, but the bottle of red wine I'd drink with friends during our Saturday morning aperitif on FaceTime also saved me. And a lot of my friends from the peloton, knowing that I lived on my own, also sent me lots of nice text messages, so I was well-looked-after, virtually; it was a great social experience.

"Before, the time limit for me to spend on the home trainer was an hour-and-a-half, maximum. I didn't even have Zwift, but was set up on it on the first day of containment. My trainer was so old that, because of the noise it made, my neighbours thought I had a jacuzzi on my balcony."

"But then" – presumably having got a new home trainer – "I really started getting into it, and was averaging more than 20 hours a week. Before the virtual Tour of Flanders, I saw that I featured lower down the order of the list of riders taking part, and I took that as a challenge and I really went for it," he said.

Following what was third place at the virtual Tour of Flanders, ridden on the Bkool indoor-training platform, Roche then won a stage of the Digital Swiss 5 indoor stage race on the Rouvy platform in late April.

"With no wife, children or pets with me in my apartment, it was a case of either watching Netflix or going on the balcony to train. If I had a garden, I would have been looking after the pool or the lawn," said Roche. "It's not that going on the home trainer was the only thing I had to do, but it was lucky that I had it, else I would have gone mad."

Feels so good to be able to go out on the road again! 😊@TeamSunweb pic.twitter.com/AsgGFndQKoMay 12, 2020