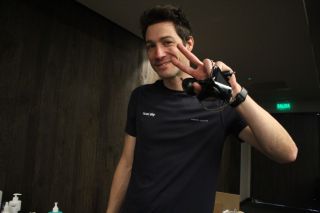 Nicolas Portal, sports director for Team Ineos, died on Tuesday due to a heart attack at the age of 40, according to reports.

Portal had been a professional for the French team AG2R Prevoyance beginning as a trainee in 2001 and continuing through 2005. He then joined Caisse d’Epargne for three seasons before ending his racing career with Team Sky in 2010. He missed much of the 2009 season due to cardiac arrhythmia but raced a full season in 2010.

Portal was part of Team Sky during Bradley Wiggins’ 2012 Tour de France win and then helped the team during the victories of Chris Froome (2013 and 2015-2017), Geraint Thomas (2018), and after the team changed names to Team Ineos when Egan Bernal won last year.

'The kindest, happiest guy I knew', tributes flood in for Nicolas Portal

Team Ineos confirmed that Portal died at his home in Andorra in a statement Tuesday.

"It is with the greatest sadness that we announce the passing of our much loved teammate, colleague and friend Nico Portal who died suddenly this afternoon at his home in Andorra," the statement read.

"We are all overcome with grief at this terrible news and would ask everyone to respect the family’s privacy at this difficult time.

"RIP Nico – your spirit will always be with us on the road and you will forever be in our hearts."

Riders and staff from Team Ineos published messages of condolence on social media, as did the Movistar team, where Portal raced when it was known as Caisse d’Epargne. They were quickly followed by an outpouring of grief from a number of other riders, teams and people who knew him.

Portal was a successful cyclist during his own professional career with a stage victory at the 2004 Critérium du Dauphiné, where he took a solo win in Aubenas. He raced seven Grand Tours – six Tours de France and the Vuelta a España once – and finished inside the top 10 on three occasions during stages of the Grande Boucle.

His career highlights also included top-10 overall finishes at the 4 Jours de Dunkerque and the Tour du Limousin, and 16th at Paris-Roubaix.