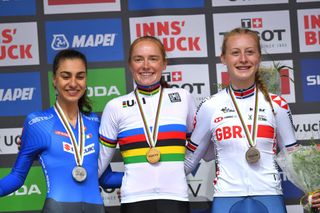 A newly formed UCI women’s team aims to give opportunities to under-23 athletes competing among the elite peloton in 2020. Pavé76, the management company behind the programme, has a stated goal to develop female riders and to become one of the top teams in the world over a five-year term.

"We want to get the best our of our riders but we also want to emphasis that education or relevant work experience are very important," said founder Servais Knaven, 2001 Paris-Roubaix winner.

"With partners like Watersley Sports and Talentpark, and more to be announced, we can offer our riders the best environment to develop as a rider but also as a professional off the bike in a work or educational setting. In five years’ time, we want to be among the best women’s teams in the world."

The team will also offer a three-tier programme beginning in the junior ranks; APB Junior Development Team, a U23 club called Watersley R&D Cycling Team, and the newly formed UCI U23 women’s team.

Pavé76 will announce the official name of the UCI U23 women’s team soon.

"Currently there is no real development for female riders," Knaven said. "They get thrown into the deep end when they are 18 and many don’t overcome that challenge. The move from juniors to elite is not only hard on a physical level but also on a mental level.

"In the Pavé76 project we don’t demand instant results. We offer a gradual plan to grow, individually tailored to each rider. Everyone has potential. It’s our job to get the best our of every rider."

"We want to give young athletes of many sports the opportunity at Watersley to become the best they can be," Petit said. "We do not only offer accommodation for long or short stay but also many facilities like a gym and top-notch nutrition. We believe in development and that’s why we are so happy to partner with Pavé76."