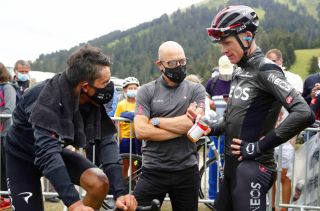 Ineos Grenadiers team boss Dave Brailsford has admitted that it has been almost impossible to replace the late Nicolas Portal, his team’s talismanic and successful sport director who died suddenly of a heart attack in March, and that the Frenchman’s experience of Grand Tour success will be sorely missed.

The hugely popular Portal, who had steered Team Sky and then Team Ineos to six of their seven Tour de France wins, has since been replaced as head directeur sportif by Norwegian ex-pro Gabriel Rasch.

"We haven't asked 'Gabba' to try and replicate Nico's role, like for like," said Brailsford speaking from the Ineos Grenadiers launch in Nice. "He couldn't do it – he hasn't got the experience, he hasn't got the same knowledge. It would be silly to ask him to fill Nico's shoes. So, we will use a more collective approach rather than a like for like."

Had Portal's guile and experience proved impossible to replace?

'The kindest, happiest guy I knew' – Tributes flood in for Nicolas Portal

"He was fairly unique," Brailsford acknowledged after a long pause. "He and I were total opposites really. He was emotional, he was kind, he was very creative, he had flair and style — but it all worked. In that sense, trying to replace him — he had a unique skillset. Nobody has won as many Grand Tours as he had in that space of time."

Brailsford admitted too that it had taken a long time to come to terms with the shock of Portal's loss.

"The last public thing I did before lockdown was go to his funeral. When we went back into racing again, I found it very difficult. You can't lose somebody like that and it not have an impact. It was more about losing him as a friend, somebody we were very close to. It has been incredibly hard to deal with if I'm honest."

"The thing with Nico was when he started out he was young, a novice, he was new to it all, so he had 10 years worth of slowly gaining his experience and gaining our trust," he continued.

"In the end, the last number of years, we'd talk about tactics and strategy the night before a race, but it was like a complete delegation of trust and authority, because we trusted him totally, with the media, with the riders — he was great all round. But we don't have that person anymore so now we have gone back to a structure that is inexperienced in that regard."

Without Portal, Brailsford said that his team's strategy and tactics would be planned more collectively. "There are a lot of experienced people here and there's a lot of experience of winning Grand Tours, but it's not all sitting in one person's head. We have had to recognise that and deal with that the best we can. We will come at it from a different angle."

'There's a lot of British talent still around'

As Chris Froome enters his final months with Brailsford and Ineos, and Geraint Thomas targets the 2020 Giro d'Italia, Brailsford suggested that his team would be renewing their search for exciting British talent to follow on from Grand Tour winners Bradley Wiggins, Froome and Thomas.

"In our earlier years we had the academy and we had Mark Cavendish, and Geraint and they all came through with Brad, so there was a real cohort of guys who came through together from a similar generation. For several years we raced and competed, successfully, with that cohort."

"I've seen comment saying we're turning our back on British cycling and 'Oh is that it?' but in fact it's the opposite actually," he said. "We had been so focussed with the group of guys that we've had and enjoyed success with – and will hopefully enjoy more success with – but I definitely think there's a lot of British talent still around."

"The talent hasn't disappeared. We've still got the ability, and I think what we need is a bit of focus again on the British angle. There are various riders dotted around in various teams. Obviously we've signed Adam Yates, which is important to us, so I think we're turning back in again, looking for the next talent, the developing talent."

Brailsford is taking a sanguine view on the context of this year's Tour, arguing that it would not be – as some have said – a "disaster" if the Tour had to be stopped due to fears over COVID-19 rates.

"I'm not sure it would be a 'disaster'," he said. "I don't buy that the economy [of cycling] would be down the pan and that it's never going to bounce back. There is a financial component but it's not the end of cycling. People are resilient and resourceful. We're not blind to it, we're cognisant of everything that's going on.

"If it's the right thing to do to stop the race, then we will change and adapt and make sure the sport survives and build for the future. That's our approach.

"Running a team, that moves all the time and has to resource itself with fuel and shopping, in and out of hotels and trying to be as careful as possible, is very difficult. We are very reliant on a lot of people and it's the behaviour of people that makes the difference," Brailsford said.

"In terms of [COVID-19] testing, I'm very sympathetic to and supportive of ASO. It's a big challenge and they're working incredibly hard to put the event on. We want to race but equally we want to make sure we are safe and that the society that we are racing in is safe also. So we have a collective responsibility.

"But with the UCI expected to make a further statement on testing measures tomorrow [Friday – Ed.] Brailsford admitted that the recent spate of false positives for COVID-19 among riders were 'a concern.'

"If the whole race is cancelled and everything is called off because there's an error in readings in the lab, then that's a bit more of an issue."