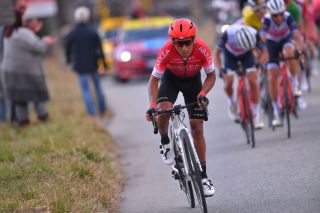 Nairo Quintana (Arkéa-Samsic) has announced that he will ride the Tour de l’Ain and the Critérium du Dauphiné in preparation for the Tour de France when he returns to Europe for the planned resumption of the cycling season in August.

The 2020 Tour de France was postponed due to the COVID-19 pandemic and has been rescheduled for August 29-September 20. The Tour de l’Ain is due to take place from August 7-9, while a scaled-back version of the Dauphiné is scheduled for August 12-16.

“Together with the team we have talked about being able to travel in the middle of July to start and do the first race, the Tour de l'Ain,” Quintana said in a video published by AS. “The second race would be the Dauphiné Libéré [Critérium du Dauphiné – ed.] and then I’ll continue to prepare for the Tour de France. These are the races that we initially have on the calendar ahead of the [main] objective.”

Quintana is currently training in his native Colombia, having returned to the country when the season was suspended due to the coronavirus pandemic in March. Like their counterparts in Italy, Spain and France, Colombian professionals were compelled to train indoors during the country’s initial phase of lockdown, but Quintana has since been able to return to riding on the road.

Although Colombia has grounded all international passenger flights to and from the country until at least August 31, the Colombian Cycling Federation has asked the government for permission to organise a charter flight to carry professional riders, including Quintana and Tour de France champion Egan Bernal, to Europe in July, ahead of the planned resumption of the season.

Quintana joined Arkéa-Samsic this season after leaving Movistar, and he had begun the 2020 campaign strongly, claiming overall victory at the Tour de la Provence and Tour des Alpes-Maritimes et du Var, as well as a stage win on the final day of Paris-Nice at La Colmiane.

The arrival of Quintana helped to guarantee Arkéa-Samsic a wildcard slot at the Tour de France, where the 30-year-old will look to better his second-place finishes of 2013 and 2015. Arkéa-Samsic have not been invited to the Vuelta a España, rescheduled for October 20-November 8.

“We’re continuing to work hard,” said Quintana. “We’re aiming to continue the way we started at the beginning of the year, which was good, and so reach the Tour de France at 100 percent.”