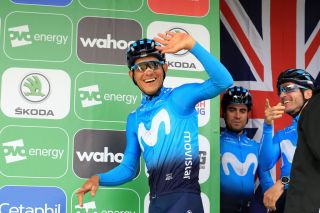 Andrey Amador's much anticipated move to Team Ineos has moved one step closer, with the Movistar team announcing on Tuesday that they have reached an agreement with the Costa Rican to terminate his contract.

Amador's move was complicated by a pre-contract agreement he signed with Movistar to extend with the team where he has spent the past 11 years. Team boss Eusebio Unzué had demanded that Amador pay a fee to release the agreement.

"We will not stop him leaving, but he has to pay the compensation because that’s what the law stipulates. This conflict has a simple solution: If he pays, he goes," Unzué said in January.

Amador thanked the team on Instagram, writing: "The time has come to say goodbye. I’m grateful, and always will be, for these 11 years we’ve been able to share at this great team, which I have only good things to say about.

"Firstly, thank you for giving me the opportunity to fulfil my dream, to be in the biggest races in the world. With hard work and sacrifice, any dream can be achieved, but in life you always need people who believe in you, and you did that.

"Leaving Costa Rica so young, being far from my family, was never easy, but I soon found my second family, for whom I gave my all in each race and had the opportunity to contribute to unforgettable triumphs.

"It’s a team that supported me in the most difficult moments of my career. Thanks to the quality of the staff, I was able to overcome them and move forward."

Amador: Of course I want to move to Ineos, but situation is uncertain

Amador, who finished fourth at the 2015 Giro d'Italia, was an important lieutenant at last year's corsa rosa for Richard Carapaz, who won the race and has also moved to Ineos. Both riders share an agent, Giuseppe Acquadro, who also manages Nairo Quintana, who left Movistar during the off-season.

The falling-out between Unzué and Acquadro stems from the Giro, with Unzué claiming Acquadro was negotiating an extension for Carapaz knowing that terms were already agreed with Team Ineos. The situation escalated in the summer as Unzué refused to work with Acquadro on any basis. At the Tour de France, Acquadro told reporters that Unzué "would suffer", adding that he would sign up riders simply to take them elsewhere.

The stand-off has had effects on current Movistar riders, too, with new signing Sergi Samitier having to find a new agent before joining the team, while Imanol Erviti did the same before re-signing through 2021. In October, Acquadro client Óscar Rodríguez moved from the folding Euskadi-Murias to Astana, having been linked with Movistar earlier in the year.

With Amador now set to join Ineos, he'll be far from the first Acquadro client at the team, joining Egan Bernal and Iván Sosa, among others, with the latter having gone through a similarly tortuous contractual to-and-fro before making the move.

In December, the Amador dispute was taken up by the UCI's Arbitral Board, though the Christmas break saw a delay in proceedings. January saw the case start up again, though there had been no news on the matter since the start of the year.

On December 31, Amador was reportedly spotted riding in an Ineos team kit emblazoned with his surname in La Garriga, Catalunya, a possible breach of his contract given that he was still contracted by Movistar at the time.

"The moment came for us to part ways," Amador's statement continued. "Although there has been speculation about a lot of things, I feel that, at 33 and with almost my whole career spent at this great team, I need new challenges in my professional life.

"I’d never be leaving this team because of any deficiency, problem, or anything. On the contrary, I always felt at home. ...

"Aside from the great moments we experienced, as well as the not so great, if I ever acted in a bad way towards anyone or offended anyone, please accept my most sincere apologies.

"Above all, Eusebio Unzue, thank you for being that person who always supported me. You are one of the people that I’ll remember with most affection, for the opportunities you gave me and for putting up with me all these years. I can only say THANK YOU. This world needs more people like you."

OFFICIAL STATEMENTMovistar Team announces Tuesday it has reached an agreement with @Andrey_Amador for the termination of the contract between both parties.We wish Andrey all the best in his future endeavours, after 11 successful years together. Thank you.February 11, 2020